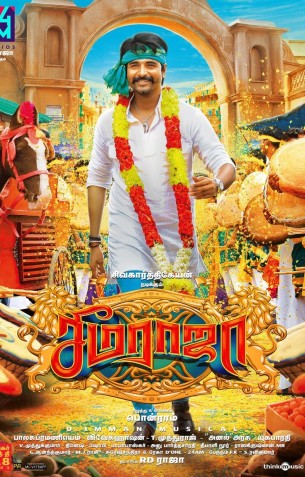 Seemaraja (aka) Seema Raja is a Tamil action comedy film written and directed by Ponram. Seema Raja film stars Sivakarthikeyan, Samantha Akkineni, Simran and Soori in the lead roles and music is composed by D.Imman.

Sivakarthikeyan as Seemaraja is a rich youngster from a Zameen family. Soori is his accountant and Samantha as Suthanthira Selvi plays his love interest. After certain incidents, a quarrel between the hero and, Simran and Lal arises. What happens from that point on forms the crux of the film Seema Raja.

Sivakarthikeyan’s screen presence is attractive and he shifts himself nicely during both comedy and serious situations. Soori has supported him throughout the movie Seema Raja and his humour has worked out very well, especially in the first half. Samantha has rocked as a ‘Silambam’ teacher, and her chemistry with the protagonist is lively with a love track that contains an equal share of playful fights and sweet romance. Simran has been given a great scope for performing and she has utilized it to the fullest, but her characterization could have been stronger. Napoleon is decent as the hero’s carefree father, but one hopes he could have been given a better role in Seemaraja.

Director Ponram has struck the right chord yet again by tapping into the pulse of the audience. All said and done, he has carried the momentum only till the interval block. He has rightfully mixed a convincing rural script in an entertaining commercial format along with a proper big scale period portion. His screenplay follows the usual template till breakpoint, but it was entertaining till the halfway mark. Things take a different turn with random sequences and many unnecessary scenes that do not connect much. On the other hand, dialogues provide massive strength to the flow of the film Seema Raja as they meet with the context neatly in sync with the comedy. The director’s skills are evident through his good execution in the flashback portions which intakes plenty of efforts to please the viewers. Seemaraja backstory is very thin and misses to create an impact though there is a link with the current timeline.

D. Imman has served full meals with his songs as they fall under various genres. His background music in Seema Raja fits the mood perfectly along with few memorable and foot-tapping tunes, which enrich the feel of the film. Balasubramaniem’s cinematography is an absolute treat to experience, as the entire film has a vibrant feel; especially the period portions that have been aesthetically shot. Vivek Harshan’s editing is quite impressive with apt cuts, but the runtime of 158 minutes seems a tad bit long and could have been trimmed to an extent in the second half. Anl Arasu’s stunts are less on believability with heroic action moments. But the war sequence in Seemaraja is impressive and it has been aesthetically choreographed.

Producer RD Raja and his team need to be appreciated for funding sufficiently to deliver a quality product. With all the necessary needs from the production house, the film Seemaraja is bright in terms of technical aspect and grandeur. The artwork is outstanding by blending the situation in an appropriate manner and the same can said about the huge set work for the flashback, which is exceptionally great. Costumes, hairdo, and makeup were on point. Hats-off to the VFX team’s work for creating a visually stunning war sequence.

All the songs in Seema Raja could have been placed at much more better spots. The pre-interval wrestling scene lags a lot and it could have been scissored. There are few not so necessary backstories added up as extra spices to the character detailing. Despite the main period portion being visually rich, the impact falls flat with less engagement. Although Keerthy Suresh has a cameo appearance, one feels it to be left rather abruptly.

Verdict :A usual rural drama with an engaging first half and lengthy second half.

Seema Raja is a Tamil movie. Napoleon,Sivakarthikeyan,Soori,Simran,Samantha are part of the cast of Seema Raja. The movie is directed by Ponram Music is by D. Imman . Production 24 AM Studios.