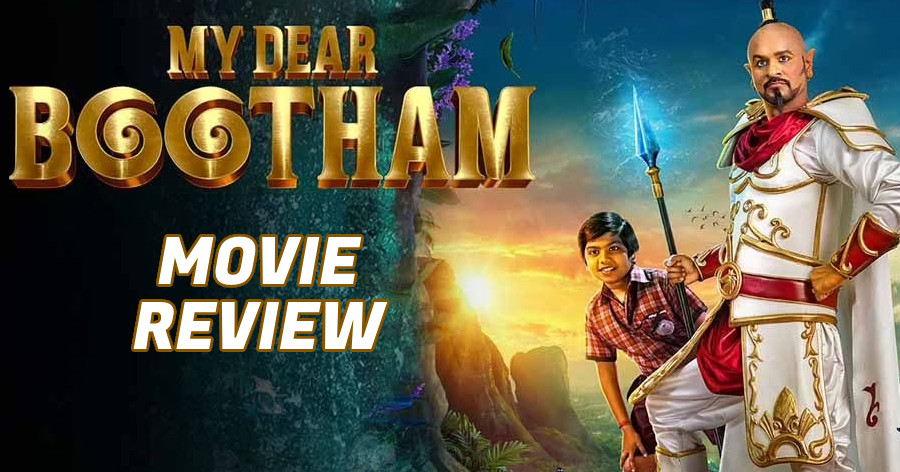 Prabhu Deva's My Dear Bootham is one of the releases of this week and the film features him and Super Deluxe fame Master Ashwanth in the lead roles. The film is directed by Ragavan who has earlier made movies like Manjapai and Kadamban. My Dear Bootham has music composed by D Imman.

STORY:
Thirunavukkarasu (Ashwanth) has stammering issues and he is being made fun of by his school mates, teachers, and people around in his neighbourhood. Karkimuki (Prabhu Deva), a genie, is let loose by Thiruna on a random day and life changes from thereon. Karkimuki considers Thiruna his Master and he stands by him all day and night. Did the genie manage to fulfill Thiruna's one wish, is what My Dear Bootham is all about.

SCREENPLAY, DIALOGUES & DIRECTION:
My Dear Bootham is a film that is strictly aimed at kids and several sequences in the film would look childish for the adults. Though the film had the potential to connect well with the adults, the makers don't really concentrate on that and instead, treat it in a generic manner. Director Ragavan heavily banks on melodrama here and that in itself turns a villain for the film. The emotions could have been organically infused into the screenplay with some seamless writing but what we get is direct, on-the-face messaging.

Especially, the mother-son relationship and the importance of leaving the kids to grow on their own could have been told in an interesting manner. Also, director Ragavan could've handled the stammering issue quite sensitively.

On the positive side, the film does have its own share of good moments as well. There are a handful of scenes that the kids would find very amusing and exciting. Take your kids along to the theatres and they're sure to enjoy it. Some of the emotional sequences also manage to strike a chord with the audience. One could just wish that the writing had been seamless throughout with the emotions not going overboard and if that had been there, we'd have got a better and refined version of My Dear Bootham.

CAST:
Prabhu Deva is definitely one of the biggest assets of the film. He delivers a light hearted and fun filled performance and this one is quite a refreshing change. Once he arrives on screen, he manages to hold our attention to a fair extent. Super Deluxe fame Ashwanth is also equally good and he scores well with both fun and emotional scenes. The equation between Prabhu Deva and Ashwanth covers up for the majority of the issues that the film has, in other departments. Remya Nambeesan, as the over protective mother, does her part quite well.

TECHNICAL:
The film isn't technically strong and most of the departments have worked on a functional note. D Imman's background score supplements the kids-friendly mood of the film, while UK Senthil Kumar's visuals have a colourful appeal, attracting the kids.

SO?
My Dear Bootham is yet another version of the Aladdin story, told in a melodramatic fashion.

Verdict: My Dear Bootham is a potential fantasy film mainly catered to kids!

Prabhu Deva as a GENIE in the colorful My Dear Bootham Trailer | Ramya Nambessan | D. Imman

Here is a fun-filled dance promo for Prabhu Deva as a GENIE in My Dear Bootham - Check out!