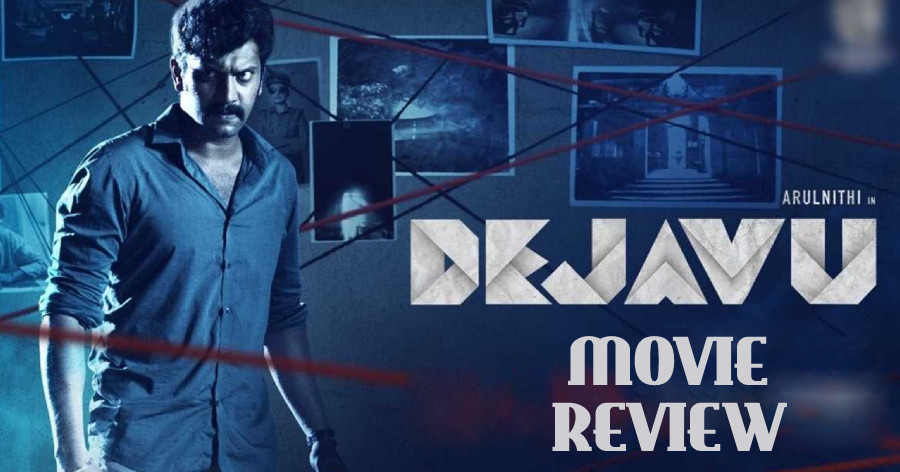 Arulnithi's next outing in Kollywood, Dejavu has released in cinemas today and it is a crime thriller directed by debutant Arvindh Srinivasan. Achyuth Kumar, Madhubala, Mime Gopi, Kaali Venkat, and Smruthi Venkat form the supporting cast. So, how has the film fared? Read on to know!

STORY:
DGP Asha Pramod's (Madhubala) daughter Pooja (Smruthi Venkat) gets kidnapped by unidentified men and the following incidents after the kidnap happens exactly as predicted by a crime novelist (Achyuth Kumar). Whatever the novelist writes, it happens in real life, making the case look more puzzled and mysterious. An undercover cop named Vikram Kumar (Arulnithi) is assigned the case to resolve the mystery and find Pooja. How did the writer manage to predict every single development of the kidnap and did Vikram Kumar solve the case forms the rest of the plot.

SCREENPLAY, DIALOGUES & DIRECTION:
Debut director Arvindh Srinivasan has got a promising premise in hand and it is definitely a story that has got the potential to be converted into celluloid. The film starts off on an impressive note and it piques our curiosity. A crime novelist writer comes to a Police station to file a complaint that his fictional characters exist in real life and they commit the crimes exactly how it has been written in the book. This idea definitely has your interest and the first half keeps you glued. However, the fizz is not maintained throughout. The film has inconsistent pacing with a mix of flat scenes followed by some well-written and executed scenes.

The second half is where the lag is felt and the film falls flat after a point. Too much information is fed in the last 20 minutes and as a result, the final act looked quite hurried. Over a point, it feels like you obviously know a twist is coming up. The story holds a certain level of suspense and the way each knot is untied in the screenplay is a job well done. Despite lacking believability and logic, especially the climax, the twists might sell well with the general audiences.

With more confined writing in the screenplay and better execution, Dejavu would have been a highly compelling mystery thriller, but what we have got is a lesser impactful version of the same. The problem with Dejavu is that what sounded exciting and intriguing on paper doesn't really translate with the same impact on-screen, especially the most important climax reveal.

CAST:
Arulnithi delivers a measured performance as the undercover cop Vikram Kumar and he does his part convincingly. However, we get a sense of dejavu indeed as we have seen him in similar kind of stories and situations already in the past. It is probably time for the talented actor to shift gears and be a part of stories of other genres.

Achyuth Kumar is one of the most interesting casting choices and he pulls off the role on an impressive note. Due credits to MS Bhaskar for his excellent dubbing. Madhubala's performance is quite okay, but she doesn't seem to sit perfectly for the role of Asha Pramod. Kaali Venkat leaves his mark with the limited screen time that he gets. The rest of the fresh faces in the film could have put out better performances.

TECHNICAL:
PG Muthiah's cinematography is definitely one of the positive aspects of Dejavu and the framings are neat and the colours contribute to the mood of the film. Ghibran's music tries to add more tension to the scenes and some of them succeed in its mission. The score might remind you of Ghibran's previous works, especially Ratsasan. The edit work is fine, except for the last segment which could have had a better treatment.

SO?
The promising story and interesting twists save Dejavu to a fair extent.

Verdict: Despite the shortcomings, Dejavu is a watchable, engaging mystery thriller, thanks to its suspenseful story!

Arulnithi's next flick gets an official release date - check out!!