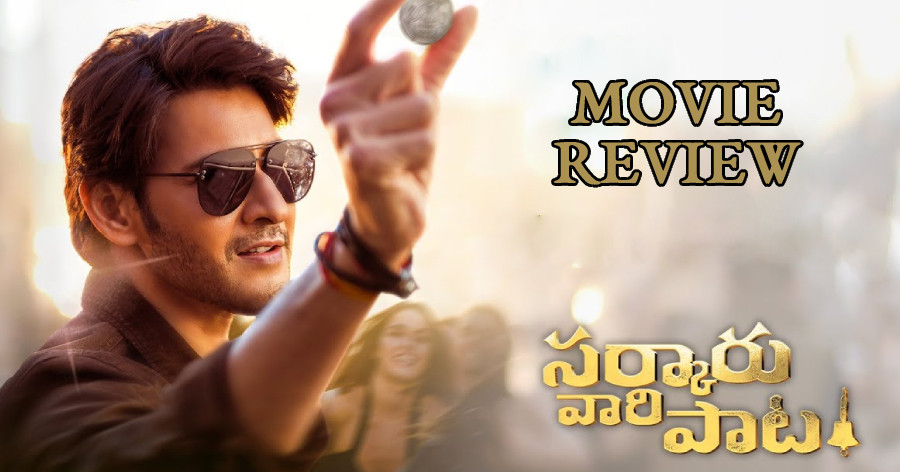 After 2 years, Mahesh Babu has finally gotten a release in the form of Sarkaru Vaari Paata which has hit the screens today amidst huge expectations. The film is directed by Parasuram of Geetha Govindam fame and has Keerthy Suresh playing the female lead. Star composer SS Thaman has scored music for this film. Is Sarkaru Vaari Paata a quality entertainer that will be enjoyed by the masses? Read on to know!

STORY:
Mahi (Mahesh Babu) runs a finance company in Miami, USA, and is quite successful in the business. Kalaavathi (Keerthy Suresh), a casino addict, fakes her original identity and gets a loan from Mahi in order to continue her casino games. After coming to know that Kalavaathi's father is Rajendranath (Samuthirakani), who is one of the most popular and influential entrepreneurs in India, Mahi flies down to India to get back his money with interest. Upon his arrival, Mahi realises that bigger problems are at stake. At the end, did Mahi win his mission against Rajendranath forms the rest of the premise.

SCREENPLAY, DIALOGUES, & DIRECTION:
Sarkaru Vaari Paata is a templated commercial potboiler that takes you through a tied and tested route. The film takes its own sweet time, almost close to an hour, to get into its core. The initial half is mostly filled with Mahesh Babu - Keerthy's love track which has the potential to connect well with the masses. It is fairly likeable, turning out to be passable. The pre-interval sets up a solid base for the face-off between Mahi and Rajendranath, and as you anticipate an exciting ride in the second half, director Parasuram disappoints you.

The writing is ultimately cliched and doesn't offer anything new or exciting for the viewers. Had the packaging been more effective with solid stretches, the film would've engaged better. Except for the one lorry sequence and the 'Ma Ma Mahesha' song, the entire second half falls flat, especially Keerthy's romantic portions are a complete downer. After a certain extent, the film turns out to be boring. For a fact, we know that Sarkaru Vaari Paata is going to be a mass masala entertainer and you can't expect anything out of the box.

Yet, the film could have definitely been made engaging with a stronger screenplay and effective direction. SVP also lacks the emotional connection that it should have ideally had, during the scenes between Mahesh Babu and Nadhiya. The characters are weakly written, especially the antagonist, who possesses no big threat to Mahesh Babu.

CAST:
Mahesh Babu looks at his charming best and has a delightful screen presence. He shoulders the film and takes it forward with a pretty neat performance. Mahesh Babu also excels and shines in the dance and action segments, providing a wonderful treat for the fans. Keerthy Suresh fulfils the requirements of a mainstream commercial heroine, but it'd have been interesting if there had been more depth to her character. Samuthirakani is turning out to be the go-to villain these days in Telugu and he makes a fair impression. As already said, the writing of his character is weak. Vennela Kishore chips in for a few laughs, while the rest of the supporting cast are okay in their respective roles.

TECHNICAL:
After Mahesh Babu, it is Thaman who saves the film to an extent with his score that uplifts the film to a fair level. Coming to the songs, Thaman delivers three highly enjoyable numbers that appeal well with the masses. Madhie's visuals are impressive with neat compositions and well-lit shots. The wise usage of slo-mo shots to elevate Mahesh Babu's stardom is impressive. Marthand K Venkatesh's edit should have been more effective in keeping the film intact. Due credits to the stunt choreography team for their work.

SO?
Mahesh Babu tries to save Sarkaru Vaari Paata, but other departments don't lend support, especially the writing.

Verdict: Mahesh Babu shines in this mediocre commercial drama that fails to engage you!

Keerthy Suresh shares a brand new update on her next biggie and fans can't keep calm!

The highly awaited and electrifying trailer of Mahesh Babu's Sarkaru Vaari Paata is here - check out!

GREAT NEWS for all MAHESH BABU fans - the much awaited update on his next is out!