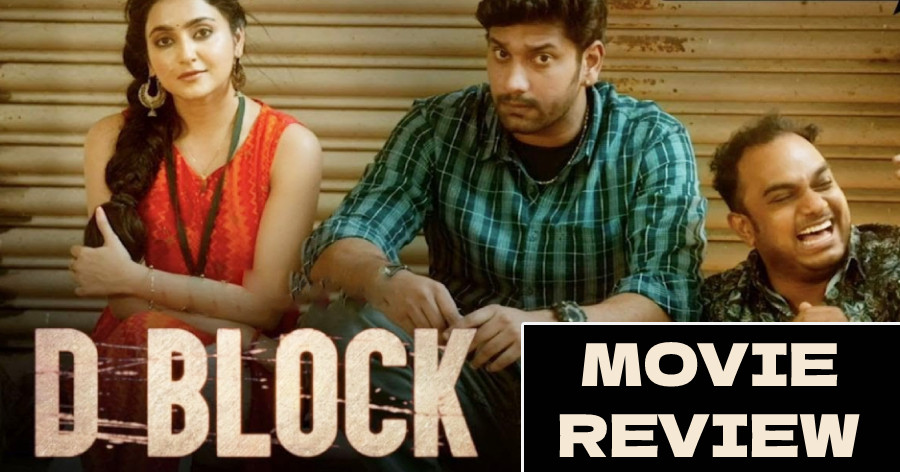 STORY:
The story starts with a woman being tortured in a secluded house. Cut to 4 years later, girls disappear randomly from the women's hostel (D block) and are later found dead. A group of first year students (Arulnithi & friends) take up the courage and responsibility to get to the bottom of this mystery,

SCREENPLAY, DIALOGUES, AND DIRECTION:
YouTuber Vijay Kumar Rajendran could have put a lot of thought into writing this piece. The first half is a drag while the second half is quite decent. He did succeed in keeping things interesting here and there, especially the thrill moments, but not enough to hold the audience's attention given the lazy writing. Some of his choices are bound to make the audience laugh at serious moments, which is not a good thing considering the fact that the film's genre is a thriller. The film never takes itself really seriously.

The dialogues lack completeness and sometimes it seems like no one in the film cares about how the dialogues do not make any sense. For instance, there is a moment where the lead actress asks the hero, "Will he come?", to which he says. "Yes. He will DEFINITELY come". She then asks, "Are you sure?", to which he says, "He might or might not come." This takes place in a matter of 5 seconds and the dialogues are already contradicting themselves. This happens frequently throughout the film and is not something you can look past since it is very prominent. Other than that, dialogues between characters in the college episodes are well done and made very clear.

The film is not something that would make audiences stand in their seats and pump their fists up in the air as some of the most serious moments don't lend the intended impact.Considering the fact that D Block is Vijay's debut directorial, the film does have its own share of issues, with regards to writing and filmmaking. However, he did get one crucial element right - the thriller part of a thriller. Scenes that create suspense were very well done by him and jump-scares were perfectly timed and executed. Those moments are sure to keep you hooked. Some of the comedy sequences during the college episodes were enjoyable, having the potential to connect well with the youths.

CAST:
Arulnithi has a knack for thriller and horror films which has always worked in his favour. This time too he has done a commendable job in this thriller as he knows the dos and don'ts after loads of experience in the genre. But given the weak screenplay and direction, he could not utilize his full potential as resources were limited. Avantika Mishra's performance was alright, but not the best. She did whatever she had to do. Vijay Kumar Rajendran's part in the film was questionable. The film will not make any difference even if he had not been there. Charandeep who plays the antagonist has zero dialogues in the film but made it work with his intimidating screen presence. He is able to portray his character so well that after a point the audience hope they do not come across his psychotic persona again.

TECHNICAL:
The cinematography (Aravinnd Singh) and music (Kaushik Krish) during the intense scenes are good. The frame captures what needs to be seen. It does not show anything more or anything less and is kept limited which works well in this regard as the thriller element has to be kept a mystery. And it is during these scenes that the eerie music takes the cake. It builds up suspense and is also timed perfectly for great jump scares.

SO?
D Block is THE BLOCK that sits between a good film and a bad film. With a little bit more thought and time, the film would have inclined towards the good side.

Verdict: D Block gets its thrill moments right, but as a film, it turns out to be a middling affair!

New fun glimpse from Arulnithi's D Block out now - do not miss this!!

Arulnithi's next film gets an exciting update | This sensational Tamil YouTuber's debut directorial!