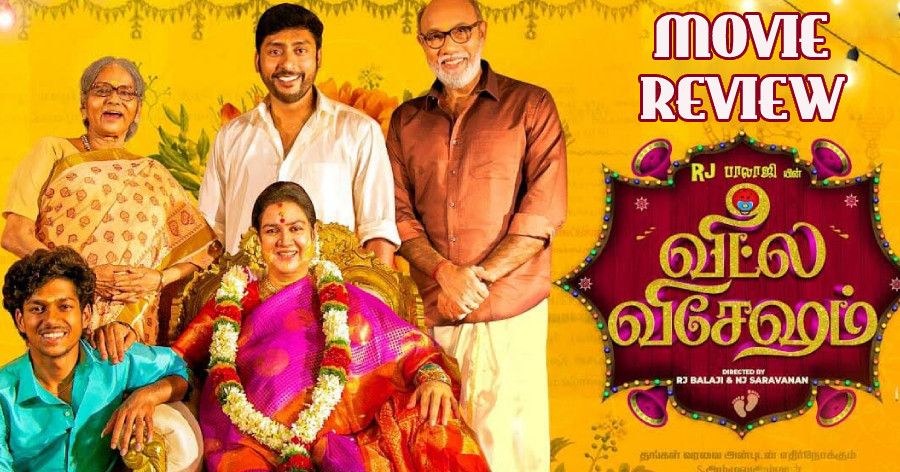 Following the success of Mookuthi Amman, RJ Balaji is back as a filmmaker with Veetla Vishesham (co-directed by NJ Saravanan). The film stars Balaji, Sathyaraj, Urvashi, Aparna Balamurali, and the late KPAC Lalitha in the lead roles and is produced by Boney Kapoor's Bayview Projects LLP.

STORY:
An elderly couple, Sathyaraj and Urvashi, parents to two grown-up children - Elango (RJ Balaji) and Anirudh (Visvesh), announce they are expecting another child, much to the shock of one and all. How does society react to it and how does that pregnancy create problems inside the family? Watch the film to know!

SCREENPLAY, DIALOGUES, & DIRECTION:
Despite being the official remake of Badhaai Ho, RJ Balaji and his team have reworked the narrative and have beautifully presented it, suiting the tastes of the Tamil audiences. Several scenes have been tweaked and presented in a much more interesting fashion and it works in the favor of the film. The writing, especially the dialogues are well thought out. Veetla Vishesham is a film that explores human relationships and family bonding on a very relatable note where there will be at least one scene that every single person will relate to and that is probably where the film wins.

The writing is perfect and it brings out the emotions effectively with the lines and the translation has also been seamless. RJ Balaji and NJ Saravanan, the director duo have packaged the film in a likable manner and the fun and light-hearted mood are maintained throughout, from start to finish. It has been quite some time since Tamil audiences watched a breezy, feel-good family entertainer and Veetla Vishesham is a perfect choice.

The film offers several hilarious moments, like - Sathyaraj's revelation to RJ Balaji about the pregnancy, Aparna's visit to RJB's house, the climax sequence in the hospital, and many other such instances. If you expect Veetla Vishesham to be just about fun, NO, the film has much more to offer. The serious drama and emotional sequences have also been neatly shot and executed without any artificiality. The film has a negligible level of issues, but that doesn't matter when the core is intact.

In a sensitive script of this style, the writing and execution need to be carefully done and RJ Balaji and the team make sure that the film is morally right. When you hold the audience in high spirits and energy, you know the film has won. And, on that note, Veetla Vishesham is a surefire winner.

CAST:
Sathyaraj and Urvashi are the main stars of Veetla Vishesham and both the veterans deliver top-class performances. It is indeed heartening to see Sathyaraj in a vibrant and fun-filled role after quite some time and on the other hand, Urvashi proves her mettle as a performer with her eyes and innocence. KPAC Lalitha, with her legendary experience, delivers an outstanding performance.

RJ Balaji, the actor has surely bettered the game with Veetla Vishesham and he looks more confident with this one. His genuine attempt in approaching the emotional sequences is appreciable. Aparna Balamurali, as the female lead, puts out a mature performance that gives closure to the film, in terms of the star cast. Visvesh as the younger brother is a delight.

TECHNICAL:
Girishh Gopalakrishnan's 'Daddy Song' has a fun and peppy vibe to it and he holds the vibrant mood of the film through his spirited score. Karthik Muthukumar's visuals ensure the colorful and positive mood of the film and the colors that have been chosen are pleasing to the eyes. Selva RK's edit is seamless and neatly done.

SO?
Summing up, one can say that Veetla Vishesham is the best among the three films that RJ Balaji has directed (or co-directed). A winner indeed!

Verdict: A super fun-filled and heartwarming film supplemented by strong performances. Watch it in theatres with your family!

New heartwarming song from RJ Balaji's next out now - catch it here!

RJ Balaji makes the much-awaited big announcement on his next - here is what you need to know!