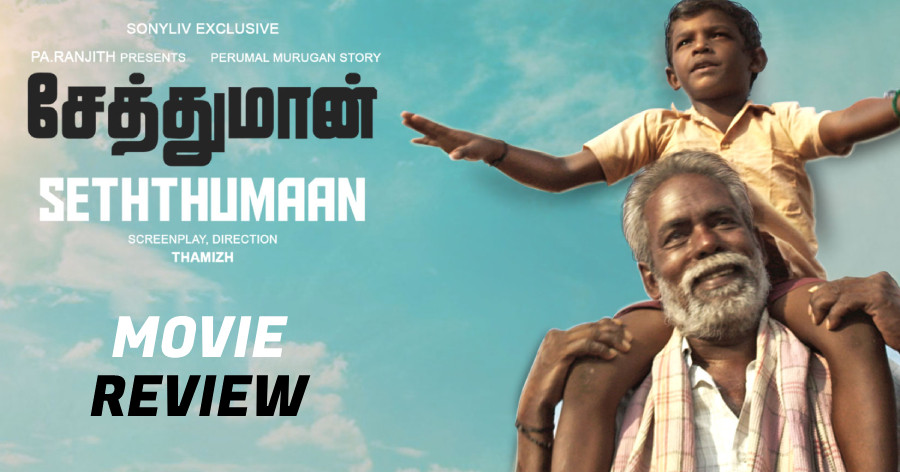 Pa. Ranjith is a producer who constantly churns out quality films under his banner of Neelam Productions and his latest venture, Seththumaan is no different and hits the bullseye. The film, directed by debutant Thamizh, is streaming on the SonyLIV platform from today and here is our take on the movie.

STORY:
A group of men belonging to various castes plan to eat pork, an activity that is ridiculed, considered cheap and disgusting by the people belonging to dominant castes in the village. The journey of eating pork and the drastic changes that the incident brings about in their lives is what Seththumaan is all about.

SCREENPLAY, DIALOGUES & DIRECTION:
Seththumaan is one of those films that comes straight from the heart of the filmmaker. The director here is Thamizh and he makes a fairly impressive debut. Though Seththumaan takes quite some time to get into its core and has a few other issues, the film proves to be effective in what it sets out to achieve. The writing is neat and grounded (penned by Perumal Murugan) and it manages to shed a light on the various acts of discrimination that are prevalent in our society. The film showcases exceptionally the caste politics of food in multiple layers. The parents of Kumaresan are murdered merely because they consumed beef. Also, there's a scene where the little boy says his teacher laughed at him because he said he eats all kinds of meat and this one is suggestive of how the upper strata of the society look down on the oppressed classes in terms of their food culture.

The relationship between various characters has also been etched out neatly and it adds to the strength of the film. Seththumaan is a film that has a docu-drama appeal and an inclination towards arthouse cinema at places and the film will have a subjective take among the audiences. The pace of the film is inconsistent at times and the climax fight looks overstretched, which could have probably been cut shorter. How drastic can a man's ego result in? Seththumaan explores this question in detail with so many subtexts and the film surely has got a unique voice.

CAST:
Manikkam as the old man Poochi has lived the part. He has delivered a naturally innocent performance that holds your attention. People might recollect or relate his performance with that of the late Nallandi who acted in Kadaisi Vivasayi. Ashwin as the young and vibrant Kumaresan has also equally delivered his best and he exhibits a great level of talent, especially in the scenes with his grandfather. Nakkalites Prasanna Balachandran (as Vellaiyan) is a delight and his rooted performance adds more authenticity and flavour to the film. The lady who played Vellaiyan's wife instantly manages to bring in laughs with her body language and dialogue delivery. Stronger performances could have been extracted from the rest of the cast.

TECHNICAL:
Pratheep Kaliraja's handheld shots help in adding more reality to the film and it kind of transports you to the world that is rustic, sunny, and filled with barren lands. The long, single shots are also effectively executed. Bindhu Malini's background music adds a good level of support and it turns out to be an effective tool for the narrative. Prem Kumar with his edit and Antony BJ Ruben with the sound design pitch in their valuable effort.

SO?
With grounded writing and neat performances, this one emerges as a quality product.

Verdict: Seththumaan is an impactful slice-of-life drama that surely deserves a watch!