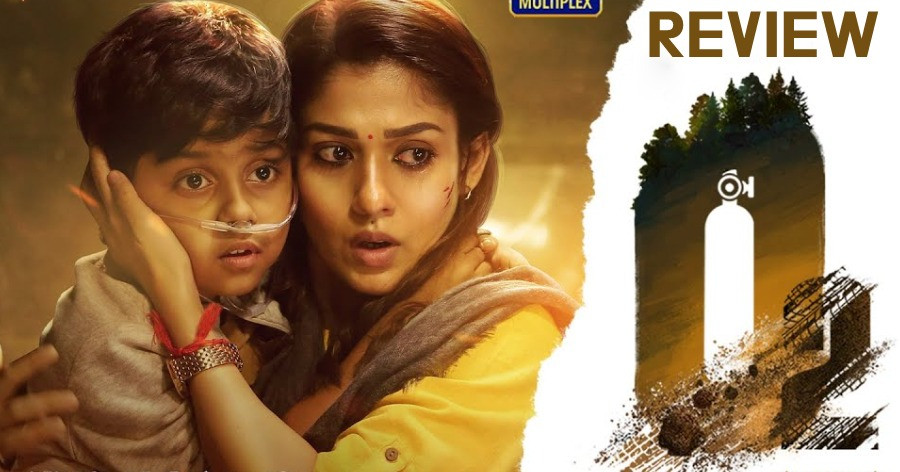 Lady Superstar Nayanthara's O2 is the latest direct OTT release in Tamil cinema and the film is out on the Disney Hotstar platform. O2, a survival thriller, is directed by debutant GS Viknesh and produced by Dream Warrior Pictures.

STORY:
A private Omni bus, carrying passengers traveling from Coimbatore to Cochin, meets with an accident due to a tragic landslide. The bus falls into a trap, eventually putting the lives of the passengers in danger. The doors get locked and the bus is covered by rocks and mud, leaving no space for air to enter. All of them will now have to fight it out for oxygen to survive. To what extent do the passengers go to save themselves and were they successfully rescued is what O2 is about.

SCREENPLAY, DIALOGUES, & DIRECTION:
Debutant filmmaker GS Viknesh looks to be a person with clarity and his filmmaking style and presentation are suggestive of it. The premise is also quite interesting, with the potential to be converted into celluloid. The writing has a fair share of well-thought-out moments that hold your attention. Survival thrillers usually tend to keep the audiences on the edge of their seats, biting their nails and rooting for the characters. O2 also tried to leave that impact but fell short to an extent. The execution is where the film probably lost its fizz as you don't get to feel the tension as a viewer. Director Viknesh doesn't leave the shot to stay for a few more seconds, and instead, he jumps forward not leaving any space for the emotions to sync in. We see a character undergo a chaotic situation, but there's no space for us to feel the emotion. The moments are built nicely in an organic fashion, but the closure isn’t convincing. If the film had been packed with more nail-biting moments, we would have felt a connection to the characters. With a more effective execution, O2 would have been a terrific thriller, but what we see is just a decent drama. Despite understanding the idea behind the scene, the climax definitely lacks logic. Writer Viknesh could have arrived at the endpoint in an even more convincing fashion.

CAST:
Nayanthara anchors O2 and takes it forward with a very intense and emotional performance that holds you till the end. As an emotional mother, she brings to the table her experience and delivers her part neatly. Master Rithvik, as her son, scores well with his innocent and admirable act. Director Barath Neelakantan is quite a revelation as he plays the evil baddie with conviction, making the audiences feel hatred towards him. Aadukalam Murugadoss, RNR Manohar, Rishikesh, Tharani, and others play their respective parts well.

TECHNICAL:
Thamizh A Azhagan’s cinematography is one of the highlights of O2 which lends solid support in aiding Viknesh’s vision. The story is set inside a trapped bus and you don’t have the scope to explore the outside world. Instead, Thamizh provides impressive work with his camera. Vishal Chandrashekar’s music has a fair share of hits and misses. As already stated, the edit could have been smoother. There were also a few lip-sync issues in Nayanthara’s initial sequences. For a film that deals with natural calamities, the VFX should have been a step ahead to let the audience feel the impact. The graphics look tacky and needed more finesse.

So?
Yes, there are shortcomings, but O2 can be watched for its interesting plotline.

Verdict: O2 has a suspenseful premise, but falls short of logic and engagement!

Catch the intense and thrilling trailer of Nayanthara's O2 | this one is highly impressive!

Catch the latest terrific teaser of Nayanthara's next Tamil film, O2 - try not to miss this!

Selvaraghavan responds to Aayirathil Oruvan 2 with Dhanush getting stopped - Check out!

Ko 2 has an election connect