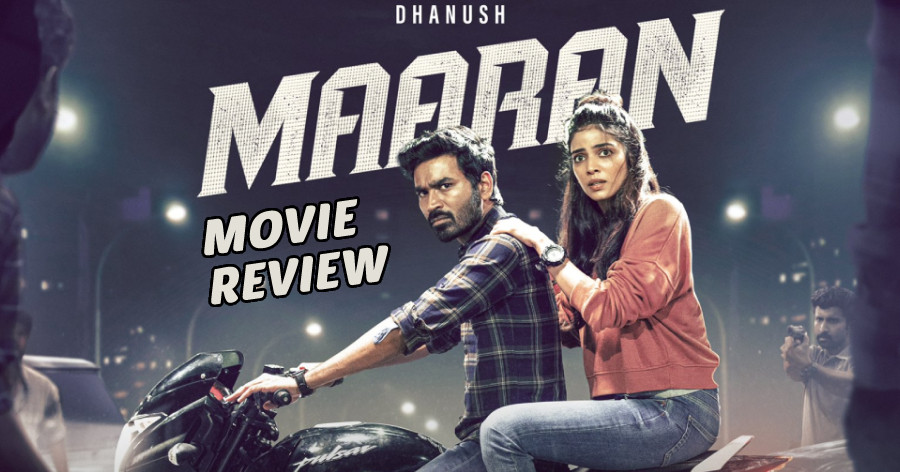 The highly anticipated Maaran has finally arrived at Disney+Hotstar. Directed by Karthick Naren, the action thriller stars Dhanush as the titular character, Malavika Mohanan, Smruthi Venkat and Samuthirakani. The film is produced by Sathya Jyothi Films with G.V.Prakash Kumar as the film's composer.

STORY:
The film follows Mathi Maaran (Dhanush), a devoted journalist, who only produces news that is truthful irrespective of the consequences he may have to face because of it. He lands himself in trouble after publishing a news article about politician Pazhani (Samuthirakani). The news turns the fate of his family upside down. Eventually, Maaran attempts to avenge the people responsible for tearing his life and family apart.

SCREENPLAY, DIALOGUES & DIRECTION:
Karthick Naren's screenplay is not all that great and is actually mediocre. The pacing, character development, necessity of this plot, is all very questionable. Karthick has taken an age-old plot and has treated it in a template fashion, something that is very not him. The freshness that you see in Karthick's craft is totally missing in Maaran. Given what was presented on screen, the writing looked so convenient and easy, having no high points. The whole scene how Maaran bags the job when he goes for the interview is bland. The villain poses no real threat to Maaran as he is always able to get the upper hand one way or another. Everything just seems very over-the-top.

The first major twist of the film (mid-point sequence) in particular is staged well so kudos to that. It uplifts the movie for a second, but what comes after reminds us about the disaster that we are actually witnessing. It is plain, dull and uninteresting. It looks like the film was made just to deliver an "unexpected" twist in the end. The dialogues are abstract and insubstantial. It was very unnatural and it is not the way you would see two people conversing in real life. You get pulled out of the film when you realize that fact now and then when the characters are talking. It is a big letdown. The interactions between Tara and Chitti is very unnatural and the establishment of the bonding looked hurried.

Since all this come ultimately comes onto the director, it is evident that Karthick Naren did not do an impressive job. He is yet to gain back the form that he had in his debut flick, Dhuruvangal Pathinaaru.

CAST:
Dhanush keeps the show going for some time but that also gets disrupted as the film gets uninteresting. He loses the grip he once had on the audience and gets lost along the way due to this. Malavika Mohanan's character acted like emotional support to the protagonist, but the character didn't really serve any purpose. It looks as if she was cast in the project just because there has to be a female lead. Director Ameer has been wasted in a weak role and the same applies to Samuthirakani as well.

TECHNICAL:
GV Prakash's background music is pretty good. It was suspenseful when it had to be giving a spy-like feel to the moment and was emotional when it had to be to convey a feeling to the people watching the movie. 'Polladha Ulagam' is catchy, upbeat and great, and that was it. The dubbing is all over the place. It is not properly synced and is very evident which makes certain scenes look odd. Vivekanand's cinematography looked functional.

SO?
So if you like Dhanush, you can watch Maaran. If not, you are in for disappointment!

Verdict Maaran is a wasted opportunity - a dull and uneventful experience!

New pictures from the sets of Naane Varuven revealed - CHECK IT OUT!!

Here is when you can watch Dhanush's Maaran - Official Streaming Time Revealed!

The Vaadivaasal update that Suriya fans have been waiting for, is here! Check Out!