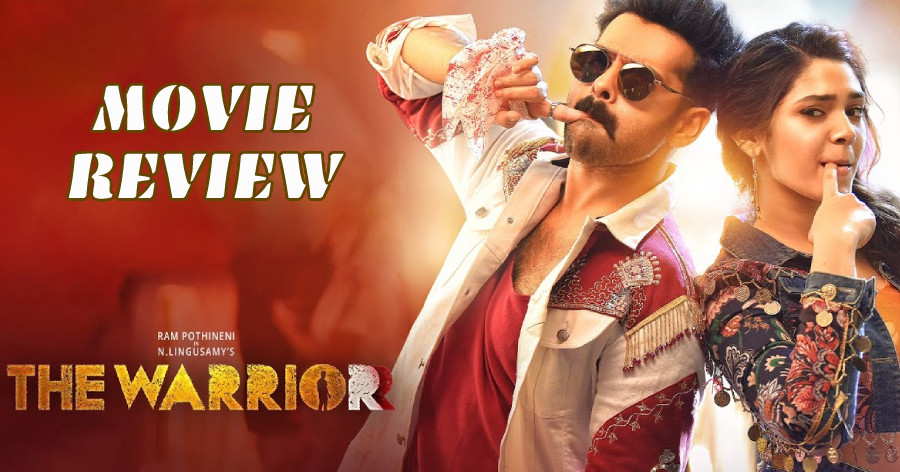 Following a gap of close to 4 years, director N. Lingusamy is back wielding the megaphone for The Warriorr, which has released in theatres today. The film stars Ram Pothineni, Aadhi Pinisetty, and Krithi Shetty in the lead roles, with music composed by Devi Sri Prasad. The Warriorr, which has been made as a Tamil - Telugu bilingual, marks the Kollywood debut of Ram Pothineni.

STORY:
Guru (Aadhi Pinisetty) is a ruthless gangster who has the entire town under his control. Satya (Ram Pothineni), a doctor by profession, takes steps to file a police complaint against Guru, but ends up in failure. In order to take revenge against Guru, Satya takes a break of 2 years and comes back as a police officer, changing his profession. This time, he has the power in hand and can take action against the men responsible for committing multiple crimes in the city. Does Satya manage to stop Guru's hooliganism forms the core crux of The Warriorr.

SCREENPLAY, DIALOGUES, & DIRECTION:
The Warriorr is a formulaic and template action drama that strictly goes by the old book treatment. Due to this, the film is largely predictable. Even the 'supposedly' unexpected pre-interval twist falls flat because you have already seen it coming. The twist had already been revealed in the trailer and so there is no cinematic high that you get when the reveal is made. The film doesn't offer anything new in terms of screenplay and writing and it is the regular good vs bad that we have been used to seeing for ages. That itself becomes the biggest issue for the movie. The film did have the potential to become a solid action entertainer but falls flat because of its predictable and ineffective writing.

The staging of certain important sequences has been executed in an ineffectual manner and as a result, you don't connect with the film. A refined writing with more depth for the characters could have made The Warriorr a compelling watch. Aadhi's characterization definitely needed more depth for the face-off to look exciting on screen. The romantic segments also don't really lend support. Despite being a popular number among the masses, 'The Whistle Song' acts as a major speed breaker, deviating us from the core.

On the contrary, the film also has a few positives to its credit. Some of the cat and mouse games between Satya and Guru have been worked out well and it has the potential to appeal well to the masses.

CAST:
Ram Pothineni fits the bill as a calm and composed doctor in the first half and a vengeful police officer in the second. His charisma and energy manage to hold our attention and his Tamil dubbing is also neatly done. Aadhi Pinisetty's character makeover heavily reminds you of Allu Arjun's Pushpa. However, due credits to Aadhi for pulling it off as the menacing villain and he definitely shines the part.

Krithi Shetty comes off as a cute heroine who appears for romantic scenes and dance numbers. An actor of her potential could have had a better-written role. Brahmaji, Nadiya, and others do their part well with the limited screen time that they get.

TECHNICAL:
Devi Sri Prasad's 'Bullet Song' is already a rage among the youth, and it turns out to be an enjoyable segment for the fans. However, his background score is overpowering in many places. Sujith Vaassudev's cinematography and Navin Nooli's edit are functional.

Verdict: A formulaic template mass masala that is let down by average writing!

HUGE: Mani Ratnam, Shankar and 26 other leading film personalities come together for the first time for this big event!

Huge announcement on Ram Pothineni's The Warriorr - here are the exciting deets!

Latest exciting update on Lingusamy's next film with this star hero!

Exciting news for Silambarasan TR fans - here is a colourful glimpse of his next!