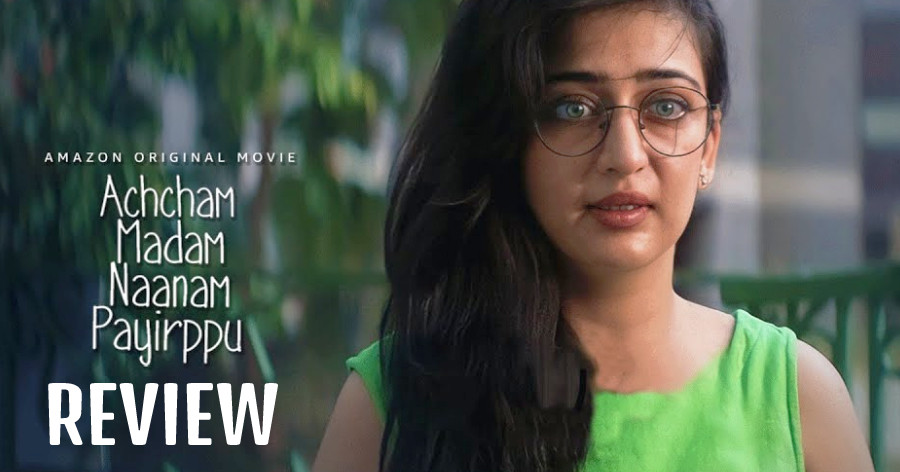 STORY:
Pavithra, a naive and innocent girl, hails from an extremely conservative family and decides she wants to have sex with her boyfriend. She, therefore, seeks advice from her two friends who have a conflict of interest about having sex before marriage. Pavithra chooses a day to lose her virginity but faces certain unexpected hurdles along the way. What those issues are and how does she overcome them form the rest of the plot points of Achcham Madam Naanam Payirppu.

SCREENPLAY, DIALOGUES AND DIRECTION:
The screenplay of Achcham Madam Naanam Payirppu has been written with a particular idea in mind. The idea is the fulfilment of a woman's desire. Although this is a unique concept that has not been tackled earlier in the Tamil film industry, its execution is not up to the mark. It does not do a good job of keeping the audience hooked to the screen. The plot is straight and simple, Pavithra wants to get laid. There are some points in the film that is okay-ish and somewhat interesting. But the film does not have any moments that would make the audience interested in knowing what would happen next. It also has some unnecessary portions that would not have made any difference in the film even if they had been left out.

The screenplay lacks a lot of elements that are key necessities to make such a film work. There are also several questionable moments in Achcham Madam Naanam Payirppu such as, why does the creepy stalker keep chaining the street dog even after it is revealed to the world that the dog is not his? Why does Pavithra let her boyfriend into the house when she does not want anyone to see even after her neighbour clearly watches him goofing around and talking to her from the street? But there are also some rare takeaway moments like the scene at the store when the girls go to buy a pack of condoms. Since the entirety of Achcham Madam Naanam Payirppu revolves around Pavithra and her desires, the dialogues are minimal.

Being the naive and innocent girl that she is, her dialogues are carefully thought out and handpicked. But that does not necessarily mean that the dialogues are top-notch. Some of them worked, while some don't. At times, it is not natural enough and that kind of takes us away from the moment. Raja Ramamurthy has attempted in presenting something new, but has fallen short with regards to the execution. He could have definitely used some fine-tuning here and there for a much better and crisp result. If he had flushed out some of the moments in Achcham Madam Naanam Payirppu that were not required or needed to be worked on, the movie would have been just a tad bit better.

CAST:
Akshara Haasan as Pavithra has given it her all. However, her screen presence is not strong enough and it looks like she often forgets that she is acting as one can see her cracking a smile/smirk mid-scene (it is not clear whether she intended to do it but it was kind of odd given the moments when it happens). Her portrayal of the character and dialogue delivery also seem a bit exaggerated from time to time.

Her friends, played by Anjana Jayaprakash and Shalini Vijayakumar as Rathi and Jessica respectively, with different perspectives towards Pavithra's needs, stand out with their convincing acts. The two represent Pavithra's inner conscience with Rathi being the shoulder devil who compels her to go for it while Jessica is the shoulder angel who says it is wrong and must avoid it. The constant war between the two friends is both fresh and interesting and ultimately put on a good show. Kalairani, Janaki Ganesh, Suresh Chandra Menon and Kiran Keshav's characters don't serve any big purposes to the film and it makes us wonder if their presence would have made a difference to the film's overall plot.

TECHNICAL:
There is not much technical going around in the film. Music is almost non-existent and is felt only in select sequences. The cinematography and editing look functional and usual.

SO:
If you want to watch a movie to experience an uncharted concept, then the film is watchable to an extent. But if you go in expecting a genre-defining film with Achcham Madam Naanam Payirppu, then you will be disappointed.