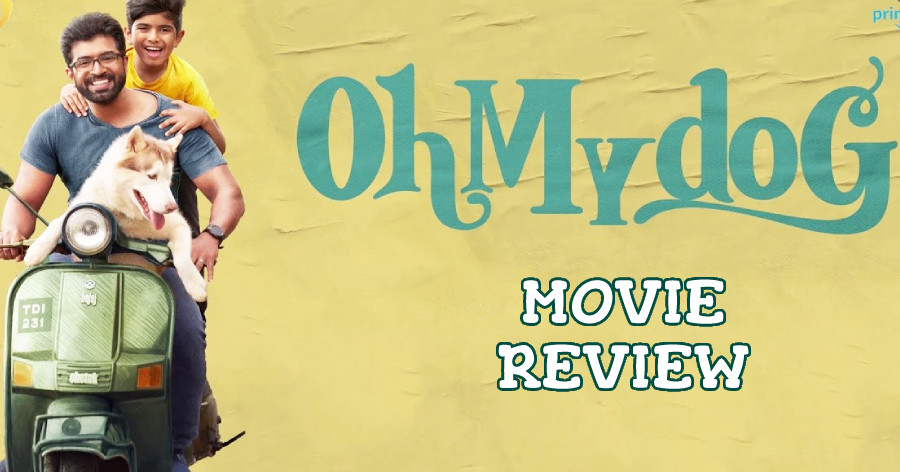 Arun Vijay's son, Arnav Vijay has made his acting debut with Oh My Dog which has now released on Amazon Prime Video. The film is produced by Suriya and Jyotika under their banner of 2D Entertainment and is directed by debutant Sarov Shanmugam. So, how has the film fared and does it deserve a watch? Here is our take!

STORY:
Arjun (Arnav Vijay), comes across a blind abandoned Serbian Husky dog (Simba) and eventually he decides to adopt Simba. Arjun desires to bring eyesight to Simba by making him undergo surgery which would cost close to 2 Lakhs, an amount that his family cannot afford. He also wants to take Simba to the Dog competition event and make him win accolades. However, Arjun and Simba have to overcome a series of barriers to defeat the odds. Did the duo win? Watch the film to know the answer.

SCREENPLAY, DIALOGUES, & DIRECTION:
Debut director Sarov Shanmugam is clear with his intentions to provide a kid-friendly film and he succeeds to a fair extent. The film has neat writing and stays grounded for the most part. Sarov Shanmugam has made a film that will appeal really well to kids and pet lovers. There are several moments that would connect well with its target audience. Usually, in a mainstream kids-based film, we would see kids speaking dialogues that are usually not of their age. Fortunately, in Oh My Dog, no such artificiality is added and the makers manage to capture the innocence of the kids.

The portions where the children collect money for Simba's operation and track down the kidnappers are finely executed, making you smile. There are some really interesting contemporary references (like the Wolverine) that the kids would relate to. The film moves at a leisure pace and you need to adapt yourself to the calm mood of the film and watch it. The climax sequence is also quite thoughtfully done and it holds your attention. The writing of Arjun's character, exploring his innocence and love, is impressively done. Due credits and brownie points to the people responsible for training Simba and making him look so cute and enjoyable on-screen.

On the downside, Arun Vijay's flashback portions and the fight scene look odd and those sequences could've probably been cut out. Also, the intended comedy track with the two goons is unfunny and flat. The staging during the initial portions of the film could have been more effectively done as the film takes its time to engage us.

CAST:
Arnav Vijay makes a fair impression with his portrayal of Arjun and his innocent performance keeps the lighthearted mood of the film going. With more grooming and guidance, Arnav can definitely up the game with his coming ones. Simba, the dog, is the star of the film. The cuteness of the Siberian Husky is captured beautifully and he keeps you in smiles throughout. Arun Vijay gets a prominent role and he does it with complete ease. Mahima Nambiar is equally impressive as a doting mother. Veteran actor Vijayakumar leaves his stamp despite having only a few scenes to perform.

Vinay pulls off the antagonist character of Fernando quite convincingly with swag and class. He looks menacing, but the performance might remind you of his work in Doctor and ET. Slighter variations in approaching villainous roles would make the difference for Vinay.

TECHNICAL:
Nivas K Prasanna's background score truly compliments the mood of the film. The re-recording uplifts the emotions neatly, doing its part. Gopinath's visuals look pleasing and capture the scenic beauty of the hills. Also, the way Simba has been captured is beautiful. Except for a few not-so-needed insert shots,  Meghanathan's cuts ensure the smooth flow of the film.

SO?
Summing up, one can say that Oh My Dog is a cute, kid-friendly film that will make you smile!

Verdict: Oh My Dog is a sweet film that will best appeal to kids and pet lovers!

Suriya and Jyotika come together for a special moment - video goes viral! Watch it here!

Suriya unveils the teaser of his next film and this looks adorable and cute! Check Out!

SURIYA officially announces the release date of his next film - check out for full details!!