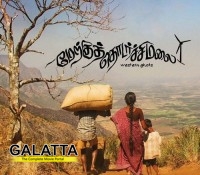 Revolves around the life of a hard-working farmer at the western ghats. Director Lenin Bharathi has to be appreciated for taking up a strong plot like this and presenting it with complete authenticity. Every single movement in Merku Thodarchi Malai is realistic and the characters are also portrayed in the same way, so it was quite easy to connect with the movie.

Merku Thodarchi Malai story is very hard-hitting, thin line explores an undeniable truth. The screenplay is to the point, made without any compromise to fit the commercial angle. The filmmaker in Merku Thodarchi Malai has incorporated various important details in a subtle manner. Raasi Thangadurai’s dialogues are extremely natural and stand as the unique selling point.

There is a good scope for performing, unknown artists have just lived in their characterizations in Merku Thodarchi Malai. Engagement wise, Merku Thodarchi Malai film holds us quite on and off. But however, every frame conveys something and has a purpose. The movie might not be everyone’s cup of tea, overall it is dry because the script is designed in such a way.

Isaignani ilayaraaja’s music is top-notch, there are just a couple of good songs placed to take the story forward. Background music in Merku Thodarchi Malai is kind of smart, soundtrack appears only at necessary portions and the rest are left over silently. Theni Eswar’s cinematography is truly stunning, the drone/ aerial shots are mesmerizing and he has to be awarded for picking up live locations, many single shots have also come out well.

Mu.Kasi Vishwanathan’s editing in Merku Thodarchi Malai is decent and his cuts go well with the films’ style. Many native references have brought inside the writing that helps the in the betterment of the product outcome. Sounds elevate the nature of the core idea and provide us with a quality movie watching experience. A most needed socially responsible message is conveyed well in the climax.

Verdict :A not to be missed socially relevant script that is approached very realistically.