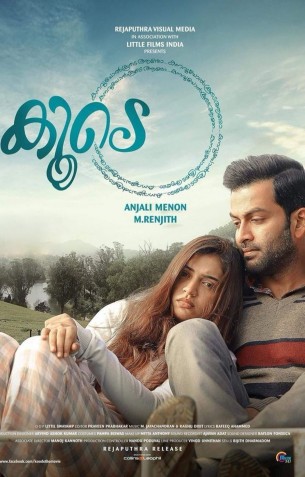 Koode is a Malayalam film written and directed by Anjali Menon. Starring Prithviraj Sukumaran, Nazriya Nazim, and Parvathy. It is a remake of the 2014 Marathi film Happy Journey.

Prithviraj works in a private company at a Gulf country. His family lives in a village at Tamil Nadu named Ketty. He has been called from his house for one of his family member’s death. How his life takes a flip side from regular routine after he arrives India forms the remaining story.

Director Anjali Menon has approached this emotional tale in a calm and composed way, the film travels in a sweet basis. Script is good and kind of different, Nazriya’s character stands as the unique selling point here. The flow is feel-good in most of the parts, also the breezy presentation adds up value to the watch.

It can be said as a character-driven movie and the characters are treated with proper care with some fine staging. Dialogues and situations are the backbone of the movie, they really elevate the experience by giving a strong connect. Comedies are sensible and clicks well, also the emotional impact is high. Few nuances placed at certain moments are pleasing to watch.

Performances are delightful, Prithviraj is highly impressive with his neat acting. While Nazriya steals the show with her cute expressions and innocence. Parvathi Menon is decent in the subtle role given to her. Even the supporting characters have been sketched perfectly and the actors get to hit sixes at regular intervals.

Songs are quite convincing, composer has utilized varied flavours that the script has offered him. Background score is soulful and gels extremely firm with the mood. Camera work is wonderful, the lighting, locations, every aspect of the department is adorable. Editing could have been better, he could have chopped-off some portions and made it crisper.

The concept and the sequences that revolve around it holds the entire first half tight. But stretching beyond a point do make us feel tiring at some areas in the later half. Few not so necessary scenes could have avoided. Nazriya’s college flashback and Parvathi Menon’s family side fall as the main shortcomings of the movie.

Significant performances from Prithviraj and Nazriya

Importance given to supporting characters

Few boring portions and glitches in second half

Dragging the drama slows down the pace

Verdict :An emotional tale that is worth watching in spite of the lags in later half

Koode is a Malayalam movie. Parvathy,Prithviraj are part of the cast of Koode. The movie is directed by Anjali Menon Music is by M. Jayachandran . Production Rejaputhra Visual Media,Little Films India.