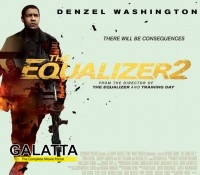 Denzel Washington as Robert McCall is a former Defense Intelligence Agency spy. Now, he is peacefully living in an apartment situated in an idle place. He gets back to investigations when his neighborhood girl gets kidnapped. How did he successfully complete his mission forms the rest of the movie.

Denzel Washington stands out with his versatile presence, he has given a subtle performance in the calm and composed scenes, he was also scintillating whenever he got into action mode. Unfortunately, there was no one in the side actors list to support him, it is mainly because of the poorly packaged roles. Without depth in the supporting characters, the film struggles to create an impact.

Director Antoine Fuqua’s presentation is legible, but there were only minimal number of catchy elements to engage the viewers. The script is literally as thin as a hair and nowhere it energizes the experience by providing any high points. Also, the motive behind the crimes are kind of silly and the justifications given to the sub-plots are far-fetched. The narration is average and lacks freshness unlike to the first part. The pace picked up speed towards the end after an intense but the engagement went for a toss till the halfway mark.

The movie is rich in terms of technical values. The cinematographer has done a first-class job by conveying the concepts through his camera angles. The editor could have tightly packed the product by chopping off certain needless scenes from the first hour. Fight scenes have come out well, especially the lengthy climax sequence was choreographed in a vibrant manner. Sound effects mixed for the gunshots give a lively feel.

The Equalizer 2 is a English movie. are part of the cast of The Equalizer 2. The movie is directed by Antoine Fuqua Music is by Harry Gregson,Harry Williams . Production Columbia Pictures.