Barathi Kannamma is one of the most watched Tamil television serials which has got a huge fan base among the family audience. The serial stars Roshni Haripriyan and Arun Prasad in the lead roles, while Raksha Chauhan, Farina Azad, Lisha Rajkumar, Kanmani Manoharan, Sweety, Akhil, Roopa Sree, Rishi Keshav, and others are seen in supporting roles. The serial which has crossed over 440 episodes, is directed by Praveen Bennett. The serial's key antagonist - Farina Azad has garnered wide attention among the audience through her performance as Dr Venba. She has managed to make people hate her character (who opposes Kannamma) and the impact has already been felt among the audience. Farina has earned a good fan base among the Tamil audience and interestingly, she also has a good social media pull.

Having said that, Farina recently interacted with her followers on Instagram and answered several interesting questions posed by the fans. During the interaction, she talked about her likes and dislikes on various topics. At the same time, there were also few people who asked a few inappropriate questions to the actress. However, Farina had an interesting reply to those people who asked the wrong questions.

One of the followers asked Farina about her panties size for which, the Barathi Kannamma actress replied, "unga akka amma size dha", (loosely translated as - the same size as your mother's and sister's). Similarly, another follower asked about her virginity in a question that read, "Yantha age la unga virgin pochi". Farina replied by saying, "Ask your mother first and let me know".

This reply from Farina Azad is earning her more love and support from the netizens and inappropriate questions like these must definitely be called out. This isn’t something new for the women celebrities in television and cinema as we have seen similar incidents in the past as well. Whenever a celebrity decides to have a chat session with his/her followers, a small section of people take it for granted and ask questions that don’t make any sense. We do not know if this will stop, but replies like these definitely make a difference. Kudos Farina! Check out the screenshot image of Barathi Kannamma fame Farina Azad's reply below: 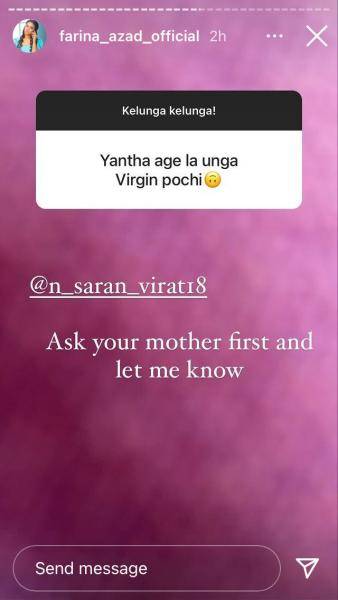 VK Sasikala released from jail but still in hospital!