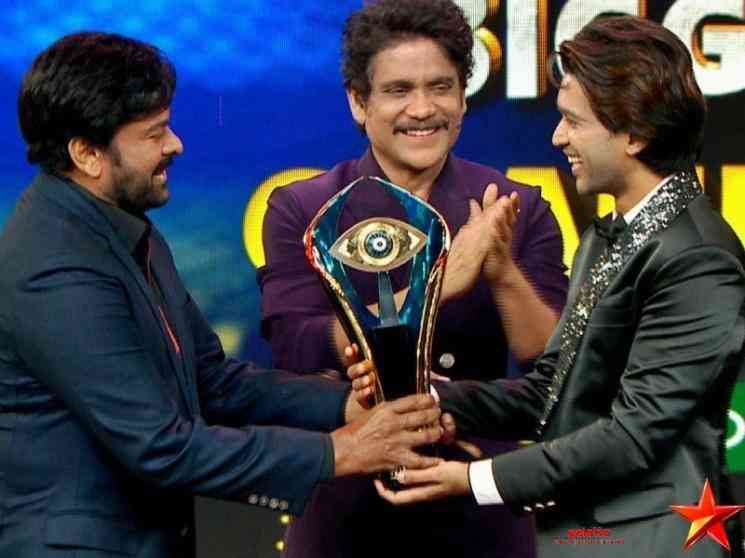 The fourth season of Bigg Boss Telugu ended in style, last night (Dec 20). The grand finale episode premiered on Star Maa channel from. 6 PM and it was a grand gala event. Megastar Chiranjeevi, as already speculated, was the Chief Guest for the night, and he handed over the trophy to the winner of the show. Abijeet and Akhil Sarthak were the last two members in contention and Abijeet was declared as the winner of this season. The results created a huge buzz on social media and there were no major complaints about it. Abijeet earned a phenomenal fan base after his Bigg Boss entry and it is his interesting and honest gameplay that has now made him the title winner of this season.

The fans are celebrating the success on social media through special hashtags, tribute videos, specially designed pictures, and more. The grand finale of Bigg Boss Telugu also witnessed a special musical concert by S Thaman who has become a sensational talent after the blockbuster success of Ala Vaikunthapurramuloo. There were also dance performances from actresses like Raai Laxmi, Mehreen Pirzada, and former Bigg Boss contestants. For the uninformed, Abijeet is an actor who made an impressive debut with Sekhar Kammula's Life Is Beautiful. The film did receive a good response and Abijeet was later seen in movies like Ram Leela, Mirchi Lanti Kurradu, etc.

However, he did not get the much needed breakthrough after that and we are sure things are going to change now as he has become the title winner of the show. He has also got a huge fan base and it would help him massively in his upcoming movies. Let us wait and see how Abijeet's life changes after the success of Bigg Boss. The fourth season of Bigg Boss Telugu started on September 6 and the show was hosted by Nagarjuna Akkineni. A total of 19 contestants participated in this season and it includes Surya Kiran, Karate Kalyani, Devi, Swathi, Gangavva, Sujatha, Kumar, Divi, Noel Sean, 'Amma' Rajasekhar, Mehaboob, Lasya, Avinash, Monal Gajjar, Harika, Ariyana, Sohel, Akhil, and Abijeet.

The show is definitely a massive success and the makers need to be applauded for executing the show amidst the pandemic.