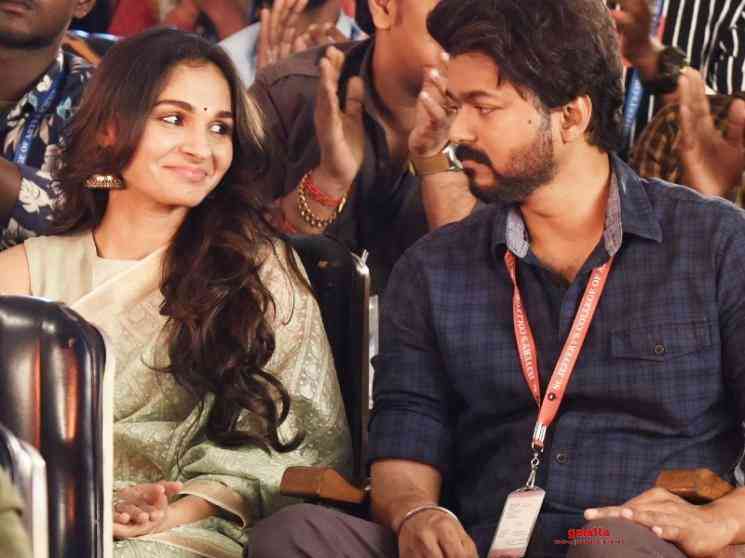 Thalapathy Vijay's Master is gearing up for its theatrical release which is scheduled to happen early next year, for the festive occasion of Pongal. Industry reports suggest that the film will have a grand theatrical release on January 13, but the makers are yet to officially confirm the news. Master is a film that has managed to hold the excitement and hype ever since the project's announcement, thanks to the fresh collaboration of Vijay and director Lokesh Kanagaraj. The film features Makkal Selvan Vijay Sethupathi as the antagonist and he would be seen playing the role of Bhavani, a ruthless villain. He will be locking horns against our Vaathi aka Professor JD.

The star cast also includes Malavika Mohanan, Arjun Das, Shanthnu Bhagyaraj, Andrea Jeremiah, Gouri Kishan, KPY Dheena, Ramya Subramaniam, and others. The makers of Master have now released a brand new still from the film on account of Andrea's birthday. Andrea is celebrating her birthday today (December 21) and wishes have been pouring in for the wonderful talent from various quarters. Master team gave a pleasant surprise to Andrea and the fans by releasing a new picture featuring Vijay and Andrea. The picture looks classy and Andrea is absolutely gorgeous. This is the first time we are getting to see Andrea’s look in the film as we never got to see her in the teaser. Andrea plays a very crucial role in the film and it is going to be interesting to see how she has performed it.

This newly released picture has already gone viral among the fans who are delighted with the surprise release. Produced by Xavier Britto under the banner of XB Film Creators, Master has music scored by Anirudh Ravichander whose songs have played an instrumental role in keeping the film in constant buzz and hype amidst the pandemic. The viral success of songs like ‘Kutti Story’, ‘Vaathi Coming’, ‘Vaathi Raid’, ‘Andha Kanna Paathakka’, have made the film hold well during this unexpected delay in the release.

The teaser of the film which released a few weeks before received a very good response from the fans and has crossed over 48 million views on YouTube. Master has cinematography by Sathyan Sooryan, editing by Philomin Raj, and art direction by Sathees Kumar. For now, check out the newly released still from Master featuring Vijay and Andrea here: