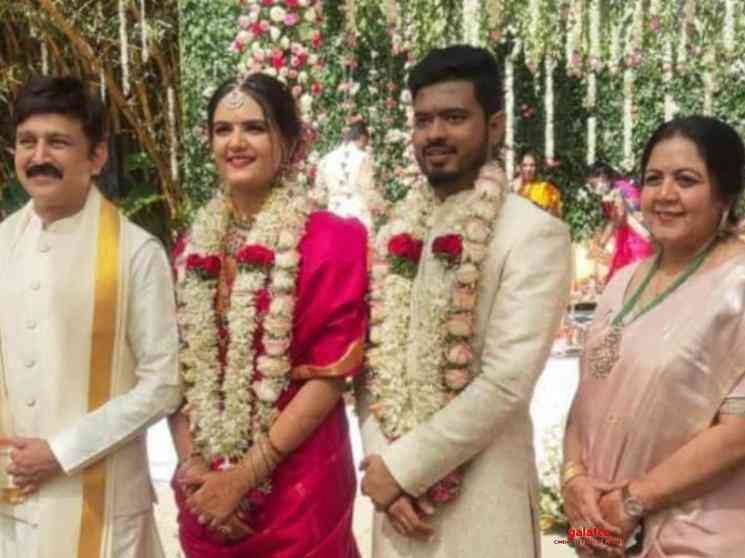 2020 has been a year that has seen numerous memorable events take place despite being a year that predominantly reminds us of the grief and tragedy due to the coronavirus pandemic. Among the special memorable happenings that made the spotlight this year, many celebrities and film industry personalities around the world got engaged, tied the knot and welcomed a newborn into this world. In that light, veteran Kannada actor and director Ramesh Aravind's daughter Niharika, a product manager by profession, got married to Akshay, a digital experience designer, in a private wedding ceremony on Monday, which was attended by close family members and friends.

Prior to the wedding, Ramesh Aravind's family had hosted a number of big events leading up to the big day, which were held in open air venues and at the actor's residence. The two-time Karnataka State Award winner had taken a week off from his film projects in order to make his daughter's wedding a day to remember. A Sangeet was also held on Sunday evening where Ramesh and his wife Archana along with his family and friends rejoiced at the grand ceremony, with the actor-filmmaker also revealing that he is planning to host a bigger event in January 2021 for his industry contemporaries, in line with the COVID-19 norms.

Speaking to Times of India, Ramesh Aravind's wife Archana spoke about the wedding and said, "With the pandemic looming large, we could not have the big ceremony that we wanted, but we still ensured we had all the varied events. Ramesh, being the stickler for rules that he is, ensured that there were just the specified number of people as per BBMP guidelines at each event and ensured we had the guests rotating with each event." Ramesh too chipped in and said, "Niharika and Akshay met as colleagues and we had a great time at the wedding that spanned nearly a week, where we mostly had youngsters partaking in the celebrations."

Ramesh Aravind is an established and reputed name in Kannada cinema, with his film career spanning over three decades. Having also worked in Telugu, Tulu, Malayalam and Hindi films, Ramesh made several appearances in Tamil films and frequently collaborated in 'Ulaganayagan' Kamal Haasan's ventures. Some of his most memorable Tamil films include Manathil Uruthi Vendum, Unnal Mudiyum Thambi, Keladi Kanmani, Duet, Sathi Leelavathi, Jodi, Rhythm, Panchathantiram, Mumbai Xpress and Uttama Villain. His upcoming film the Kannada remake of Thiruttu Payale 2 titled 100, while he is also awaiting the release of his directorials, Butterfly in Kannada starring Parul Yadav and Paris Paris in Tamil featuring Kajal Aggarwal, which are official remakes of Kangana Ranaut's Queen.

Below are pictures from Ramesh Aravind's daughter Niharika's wedding, which the actor shared on his Twitter page:

My daughter Niharika got married to Akshay today..We seek your blessings and best wishes🙏🏻🙏🏻 pic.twitter.com/7BwDHOAog5