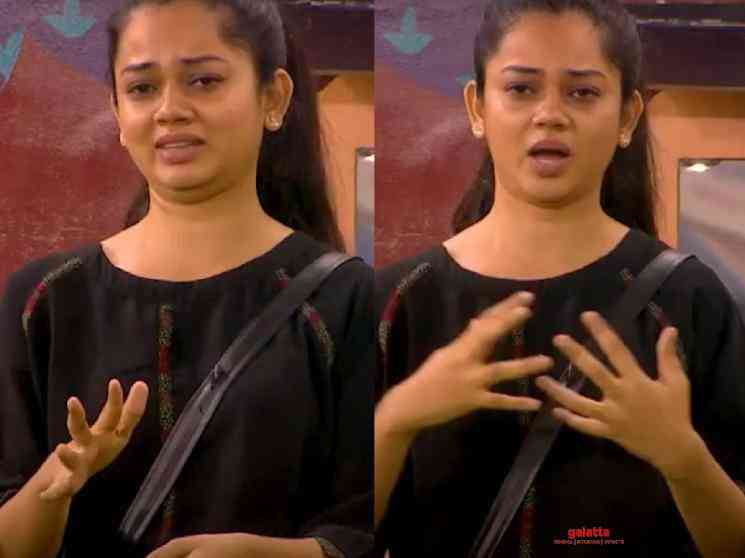 Bigg Boss 4 Tamil fame Anitha Sampath's father, Sampath passed away this morning (December 29) and his demise came as a shocker for the people of Tamil Nadu. Sampath was a renowned Tamil writer who has written several notable novels. Anitha Sampath returned from the Bigg Boss house just two days before and it is highly unfortunate that she will have to see her father in this state. The fans have been sharing their condolence messages on social media and it is indeed a big loss for Anitha. We have seen Anitha expressing her love for her husband, father, and mother during the game show.

Anitha has now penned a very emotional note and posted it on her official Instagram page. Anitha revealed that it has been more than 100 days since she saw her father and the last time she saw him was when she had to leave the house for quarantine, before the start of Bigg Boss. She sounded heartbroken and dejected. Anitha also clarified that her father was suffering from acute ulcer and did not die due to heart attack, as speculated.

Anitha Sampath’s official note on her Insta page read, “My dad Mr.R.C.Sampath suddenly demised due to age factor.. He is 62. I still can't believe he is no more. Last ah I met him when I went to quarantine for Bigg Boss. When I came home after Bigg Boss, he went to Shirdi. I dint even talk to him as his phone was not reachable.. Today 8 am heard this shocking news that he passed away when he was returning Chennai from Shirdi in train near Andhra. By tomorrow he will come to Chennai.. I wish he is alive. I can't believe this.. daddy ni veetuku nadandhu varanum.. unta neraya pesanum.. un voice kettu 100 naal mela achu..

Dad had acute ulcer.. due to age factor he passed away.. he was not able to eat for the past two days.. He dint have heart attack.. Therinji irundha munadiye eliminate agi appa kuda konja nal irundhrupen.. Vijaytv show thirumba varum.. en appa ini thirumba vara mataru.. Indha varam save agi irundha kadaisiya kuda Appa va pathuruka mudiyadhu.. Life is so unpredictable.. Everything happens for a reason.. Please take care of your parents.. I missed him.. feeling guilty..". The funeral and final rites are expected to take place tomorrow (December 30) in Chennai. 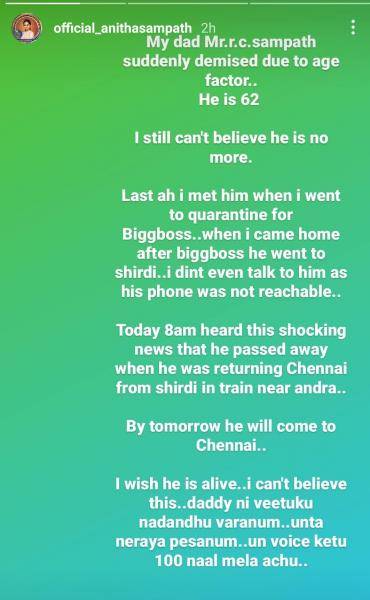 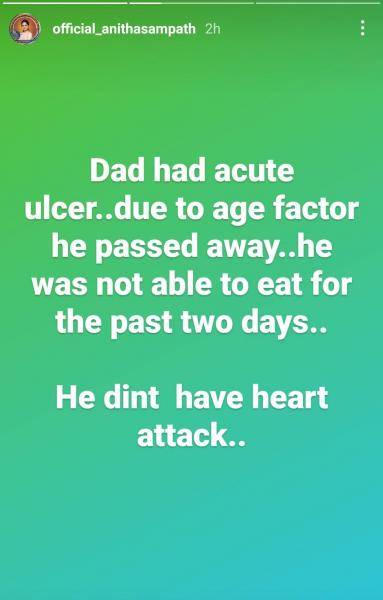 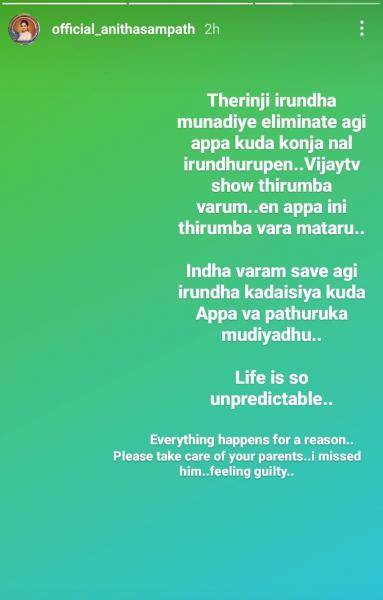