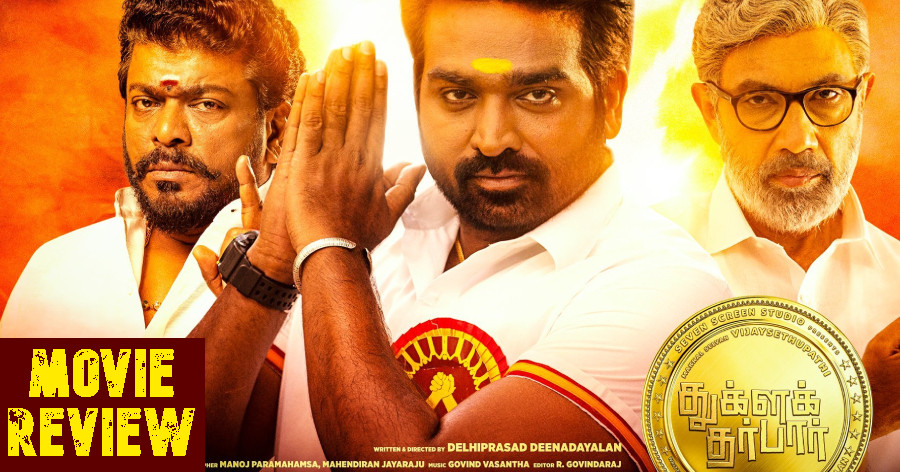 Vijay Sethupathi's Tughlaq Durbar is one of those films that manages to evoke laughter naturally without any exaggerations or dramatisation. One can confidently say that Tughlaq Durbar is a largely entertaining film that will keep you in smiles throughout. Starring Vijay Sethupathi and Radhakrishnan Parthiban as the lead stars, the film has Raashi Khanna, Manjima Mohan, Karunakaran, and Bagavathi Perumal in supporting roles. The film is directed by debutant Delhi Prasad Deenadayalan.

STORY:
Singaravelan aka Singam (Vijay Sethupathi) is attracted and influenced by his political idol, Rayappan (Parthiban), ever since his childhood. With his intelligence and smart play, Singaravelan enters the political party and climbs up the ladder to become the right hand of Rayappan, in a short span of time. As Singaravelan teams up with Rayappan and indulges in corruption, he experiences a weird changeover as his conscience takes over him after a certain point in time. Singaravelan experiences a split personality - and he finds it difficult to manage with the two sides to him. His conscience tells him to avoid corruption and transform into a good man to serve the people.  Does Singaravelan’s good side win over the evil in him is what Tughlaq Durbar is all about.

SCREENPLAY, DIALOGUES AND DIRECTION:
Tamil cinema has got a highly promising filmmaker in the form of debutant Delhi Prasad Deenadayalan. Delhi's screenplay is interestingly woven and there isn't a scene that has been constructed without a purpose. Also, the packaging looks fantastic as the film doesn't face any major dips in the screenplay. Tughlaq Durbar is largely entertaining primarily because of its uniqueness in the characterization of Vijay Sethupathi and that is strongly supported by some brilliant dialogues written by director Balaji Tharaneetharan (Naduvula Konjam Pakkatha Kaanom and Seethakathi fame). Even the serious lines have been treated in a light manner, thus keeping the fun mood of the film intact.

The film genuinely manages to strike the laughter with its writing and performances of the lead cast. We might have seen several political satire films in the past, but Tughlaq Durbar differentiates itself and stands out with its likeable characters.

On the downside, the way Singaravelan defeats his opposite personality is not convincing enough and it looks ordinary with no impact. The scene where Singaravelan, for the first time experiences, the two different sides of him, was shot in a visually appealing manner, but the end result turns out to be lacklustre. One could also wish that Raashi Khanna's character was well-written with more depth.

CAST:
Vijay Sethupathi is impressive in showcasing two different sides and it is fun to watch the transitions. It is interesting to see Vijay Sethupathi playing an enjoyable character that has been sketched on the lines of Nagaraja Chozhan / Ammavasai. Parthiban is electrifying as Rayappan and his energetic performance makes Tughlaq Durbar a delightful watch. The chemistry between Vijay Sethupathi and Parthiban is great and the duo has delivered the magic once again after Naanum Rowdy Dhaan. After Parthiban and Vijay Sethupathi, it is Karunakaran who hits the ball out of the park with his performance. Be it the funny expressions in the initial comedy portions or the emotional sequences towards the end where he points out Singaravelan’s evil nature, Karunakaran gives it his all.

Sathyaraj appears in a delightful cameo as the iconic Ammavasai, giving the film a solid end. Manjima Mohan, with her limited scope, manages to showcase the emotions just through her eyes as she doesn’t have any major dialogues to speak. Raashi Khanna looks gorgeous and does her part fairly well, but her character is restricted to just being a romantic heroine.

TECHNICAL:
Govind Vasantha's background music is likeable and lightens up the mood of the film in an interesting fashion. Though the songs haven't become that popular with the masses, the tracks are impressive. Manoj Paramahamsa and Mahendira Jayaraju's visuals aid the director's vision neatly. Govindaraj's edit is apt.

SO?
Tughlaq Durbar is a film that offers a light-hearted movie-watching experience, with the fun quotient standing tall.