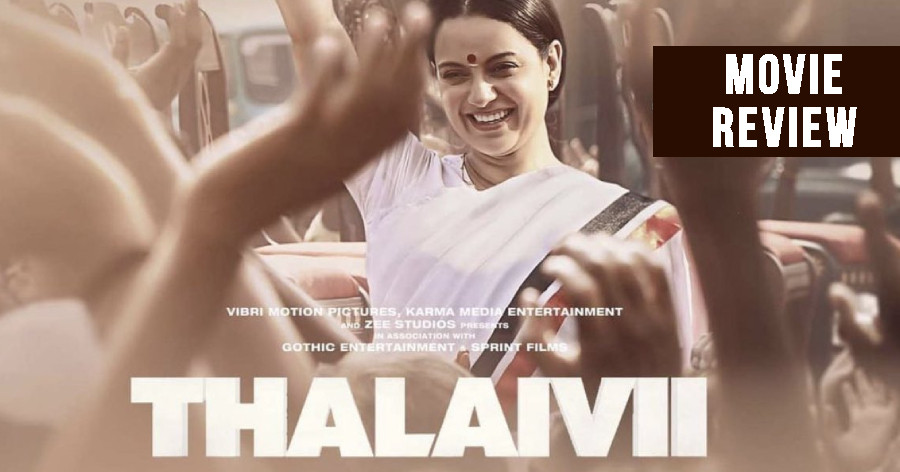 Thalaivii, directed by Vijay, takes you through the important moments from the life of J Jayalalitha, former Tamil Nadu Chief Minister and it turns out to be a fairly decent watch. The film features Kangana Ranaut in the titular character, alongside Arvind Swami, Samuthirakani, Thambi Ramaiah, Madhoo, Poorna, and others.

STORY:
Thalaivii opens with a scene where Jaya (Kangana Ranaut) is physically abused and attacked (by the opposite party members) in the Tamil Nadu Legislative Assembly. Humiliated by the incident, she takes a vow that she would enter the assembly again only after becoming the Chief Minister of Tamil Nadu. This scene sets up a solid base, acting as a good start to the film. From thereon, the film explores the journey of Jaya from her initial stages of acting to becoming the Chief Minister of Tamil Nadu for the first time.

SCREENPLAY, DIALOGUES & DIRECTION:
First things first. Director Vijay needs to be applauded for executing a film of this grand scale with conviction. Vijay's sincerity towards the craft is very much seen and he packages the movie with a fine mix of emotions and drama. On the flip side, he could've made the film more appealing by constructing more intense and exciting sequences that live up to the title of Thalaivii. The film is based on the book of the same name, written by Ajayan Bala, and has screenplay by Vijayendra Prasad and Vijay.  Vijayendra Prasad's writing adds good support as the drama between various characters is neatly written. The cat and mouse game between Kangana and Samuthirakani is pretty well done and sequences like these keep us engaged.

But, in an overall picture, the film looks uneven in quite a few places. Also, the pace of the movie is slight of concern, making the film look draggy, especially in the post-interval portions.  Though the romantic portions between Kangana and Arvind Swami were interesting to watch, it would've been much better if the film had explored more on the political journey of Jaya than the film journey. The title 'Thalaivii' would more suit the political side of Jaya, but instead, the makers focus majorly on the romance. More than half of the movie deals with the romantic episodes between Kangana and Arvind Swami and only the final segment of the movie touches upon her political journey.

Also, it would've been great if director Vijay and the team addressed Jaya's downfall on a detailed note, instead of just showcasing it on a surface level for a matter of few minutes. The makers could've attempted in changing the voice modulation of MJR after being shot, but even after that incident, he speaks the same way that he used to.

CAST:
Kangana Ranaut as Jaya delivers a fairly neat performance and her efforts to justify the character are very much visible. She scores really well in several sequences, for example, the parliament scene where she addresses the Prime Minister. However, to portray an iconic character like Jayalalitha, the performance needed more finesse. There are also major lip-sync issues, as far as Kangana's performance is concerned. We see her uttering the Hindi lines in the visual and this, in a way, kind of alienates you from the movie.

Arvind Swami has delivered an absolutely brilliant and terrific performance as MJR and he is in top-class form. More than Kangana, it is Arvind Swami, who keeps the audience invested with his performance. It is a delight to see him bring to life the iconic character of MGR. Due credits to Pattanam Rashid and the makeup team for their effortless work in recreating MGR's look as it adds solid authenticity to the film. Samuthirakani, as RNV (RM Veerappan in reality), delivers a stand out performance, acting as a shield for MJR and Jaya. Nassar as Karunanidhi is enjoyable and it is good to see him mimic the legendary political icon, to add more reality. Thambi Ramaiah fits the bill, delivering a neat performance as Jaya's trusted aide.

TECHNICAL:
G.V.Prakash Kumar's background score acts as solid support, uplifting the overall intensity of the movie. The songs, though pleasant to listen to, don't really give an impact. Vishal Vittal's cinematography gives a glossy effect, making the film look rich and classy. The compositions are neat.

SO?
Despite having several issues in the film, Thalaivii does pass the test and becomes a good watch because of its highly appreciable performances and the engagingly constructed drama between the characters.

Verdict Thalaivii is a fairly engaging film primarily due to fantastic performances from the lead actors, with Arvind Swami standing out!

Kangana Ranaut pays her tribute to Jayalalithaa ahead of Thalaivii release - VIRAL VIDEO!