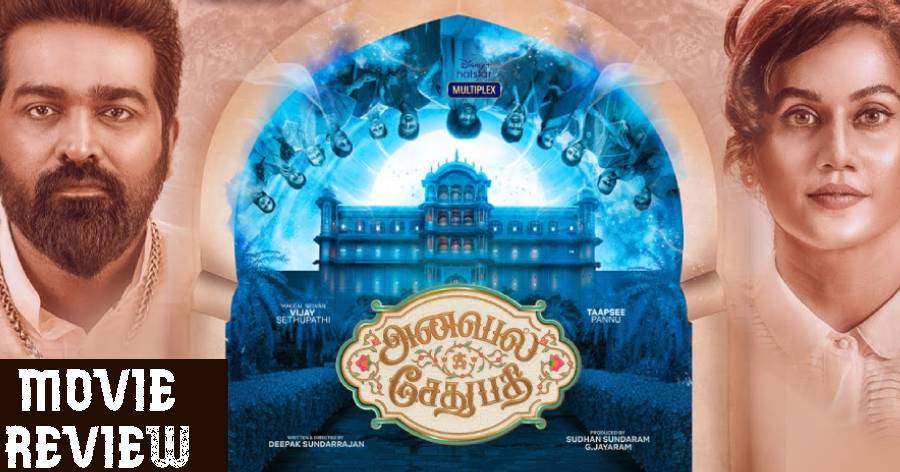 Annabelle Sethupathi is Taapsee’s next outing in Tamil cinema after Game Over and she has teamed up with debut director Deepak Sundarrajan for this film. Featuring Vijay Sethupathi in an extended cameo, the film has several other prominent names in the supporting cast. How has Annabelle Sethupathi, which has been released on the Disney Hotstar platform, fared? Check Out!

STORY:
Rudra (Taapsee), a small-time petty thief along with her family (Radikaa Sarathkumar - Rajendra Prasad - Sunil) enter a palace after a mission is assigned to them by a Police officer. They are sent to check if the place is haunted. Though Rudra’s family members are terrified by the paranormal activities that take place inside the palace, Rudra is quite fascinated by the majestic grandeur of the place. She decides to stay there and rob the antiques. Meanwhile, a gang of ghosts (people who died in the late 1940s) are also trapped inside the same palace and they soon become visible only to Rudra and not her family members.

Shanmugam (Yogi Babu), the chief among the ghosts, narrates the history behind the palace to Rudra. The story shifts back to the 1940s when the epic palace was built by King Veera Sethupathi  (Vijay Sethupathi) as a mark of love for his wife, Annabelle (Taapsee). The couple is unfortunately poised to death by Kathiresan (Jagapathi Babu) who wanted to own the palace. Cut back to 2021, Shanmugam requests Rudra to help everyone come out of the palace. What was the fate of Rudra and the trapped ghosts? Who was their saviour? Watch the film to know the answer.

SCREENPLAY, DIALOGUES & DIRECTION:
Annabelle Sethupathi is a film that is primarily targeted towards the kids and family audiences and the treatment of the story is indeed suggestive of that. The premise is quite interesting, having the potential to explore a refreshing screenplay, but what we instead get, is a cliched series of scenes that don't succeed as well as expected in holding our attention. The first half is quite watchable because of its casting equation and the drama between them, but the second half (with the flashback) is majorly dry. A film like Annabelle Sethupathi demands a super-exciting screenplay (with solid WOW moments) to keep us engaged, but that goes for a miss.

As mentioned earlier, the film might appeal better to the kids and the family audiences who would be ready to watch a timepass film. It would be more appropriate to call Annabelle Sethupathi a fantasy drama rather than a horror comedy as the film deals with several elements of fantasy right from the beginning. Had Annabelle Sethupathi been packaged with some well-written scenes and drama, the film would have definitely been a fun watch. Quite a few dialogues (like there is a scene where Yogi Babu says - pudhusa lam yevan ma kadha solran?) in the film indeed reflect the thoughts of the audience. After watching the film, you would only realise that Annabelle Sethupathi was neither funny nor scary.

CAST:
Taapsee as the protagonist delivers a neat performance and it is indeed refreshing to see her on the lighter side after watching her in a series of intense roles. Taapsee, as Annabelle, is more impressive, and the British dialect to her character adds authenticity. Vijay Sethupathi, in an extended cameo, delivers his part well, but the team could have worked more on his character to make him more believable as a king. One of the fewer positives of the film is the likeable chemistry between Vijay Sethupathi and Taapsee. Jagapathi Babu appears in a stereotyped character, while the supporting cast doesn't really get the scope to score big. However, watching all these prominent actors (Radikaa Sarathkumar, Rajendra Prasad, Chetan, Devadarshini, George Maryan, Surekha Vani, Madhumitha, Subbu Panchu, and others) together in a frame is colourful and heartening. Among the lot, Yogi Babu manages to make us laugh at a handful of places with his counters.

TECHNICAL:
Krishna Kishor's music is one of the aspects that work in the favour of the film. Though the songs don't leave an impression, the background score is definitely noteworthy. The music manages to uplift the mood of the scenes and it looks like Krishna Kishor is a promising talent to watch out for. Goutham George's frame compositions are neat, but more work could have gone into the treatment of the period portions.

SO?
If you could ignore all the logic and watch the film, Annabelle Sethupathi could prove to be a time-pass entertainer.

Verdict Annabelle Sethupathi is an underwhelming watch that falls flat on freshness and engagement!