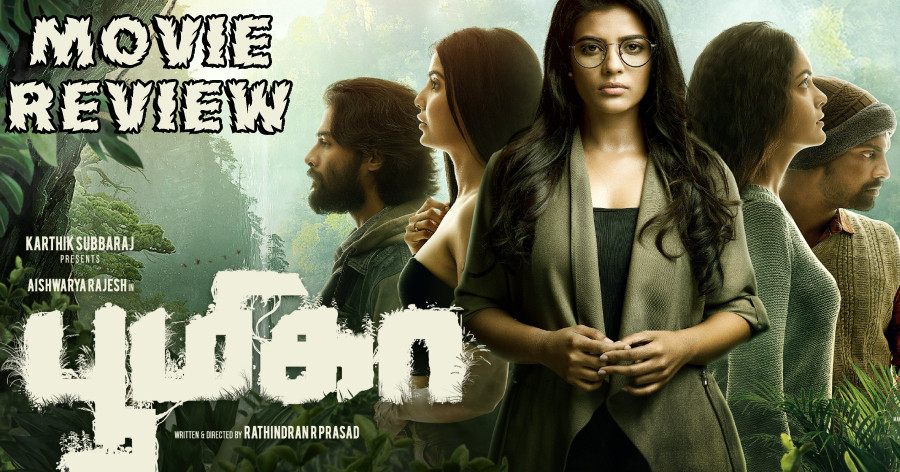 Boomika is Aishwarya Rajesh's next outing in Tamil cinema and she has teamed up with the young and promising filmmaker Rathindran R Prasad for this film. Rathindran's directorial segment, Inmai, in Mani Ratnam's Navarasa was quite noteworthy, earning a positive reception from the fans. Boomika's teaser and trailer showed good promise, creating anticipation among the film buffs. Has the film lived up to the promise? Here, you go!

STORY:
Samyuktha's (Aishwarya Rajesh) husband Gautham (Vidhu) acquires a contract to build a township villa in an abandoned forest area. Gautham takes the help of his close friend Gayathri (Surya Ganapathy), an architect, to plan the construction. Gautham, Samyuktha, Gayathri, Aditi (Gautham's sister - Madhuri) visit the guest house in the forest area to plan the construction. However, they start to experience several paranormal activities in the guest house which leaves them shocked and terrified. Slowly, they unravel the mystery behind the forest. Why did these lead characters experience the paranormal activity in the guest house and what is their fate towards the end? Watch the film to know!

CAST:
Aishwarya Rajesh as Samyuktha delivers a neat and measured performance and the talented actress garners attention once again with her knack for unique selection of scripts. Debutants Vidhu and Surya Ganapathy do justice to their roles, while Madhuri's performance and character look exaggerated and overdone. Avantika Vandanapu is a revelation. It is not an easy task to play an autistic child, but the young talent has done a pretty impressive job. Pavel Navageethan happens to be the show-stealer among the lot. The dialect and body language that he brings in through his character add more authenticity to the story's backdrop. Other actors are just about okay.

SCREENPLAY, DIALOGUES & DIRECTION:
Boomika is well-intentioned and it does fair justice in conveying the importance of nature and the environment. Right from the first scene, Rathindran prepares us for a ride that will be filled with several elements of nature. The dialogues on nature and man's greed stand out, leaving an impact. The screenplay is quite interestingly packed until the midpoint after which the pace and engagement dip by margins. The scenes that lead to the tension in the first half are well executed. The theories about relating a human body to that of the earth make us understand the topic much more, in-depth.

On the flipside, logic takes a backseat in a few important moments and had that been handled with more detailing, the film would've looked complete. The lead characters never go wrong in any of their assumptions and they get most of the things right in their first-ever go and this, in a way, lacks believability. Also, the final revelations looked a bit hurried. Despite having a traumatic experience in the forest, Gautham getting back to it again seems force-fitted. Though treating this script with the elements of horror is interesting on paper, it doesn't work the same way, visually - for example, the ghost sequence, in the end, falls flat without any impact. Director Rathindran tries to infuse a lot of concepts and theories into one single film and due to this overfeeding of information, one does not manage to hold the connection with the film.

MUSIC, CINEMATOGRAPHY, AND OTHER TECHNICALITIES:
Boomika is technically outstanding. Roberto Zazzara's visuals are brilliant, setting the right kind of mood. Be it capturing the scenic beauty of the hills or setting an eerie mood for the paranormal sequences, Roberto does an excellent job. Prithvi Chandrasekhar's background music uplifts the intensity of the sequences quite well. Due credits to the sound department for their quality of work. The VFX does look tacky, though.

SO?
With more detailing to logic and an engagingly packed screenplay, Boomika could've delivered a solid impact.

Verdict Boomika is quite a decent watch, especially for its noble message!

Amaravathy to be dubbed in Tamil