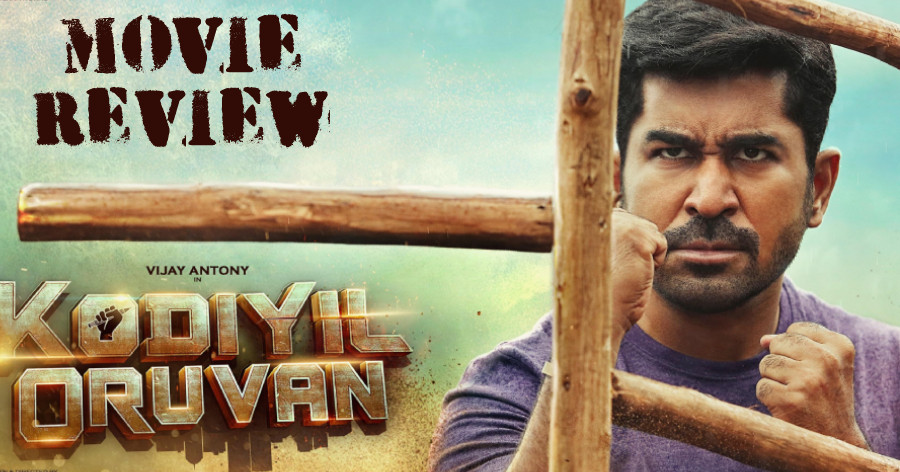 Vijay Antony's Kodiyil Oruvan, directed by Ananda Krishnan of Metro fame is out in theatres, amidst a good anticipation from film buffs. The film features Aathmika as the female lead, alongside KGF fame Garuda Ram, Super Subbarayan, Prabhakaran, and others. Read the review to find out more about the film!

SCREENPLAY, DIALOGUES, & DIRECTION:
Director Ananda Krishnan packages the film with a fair mix of all commercial elements, making it appeal to the mainstream audience in an interesting manner. The dialogues are on point and leave an impact. However, one can feel that the screenplay is a bit of a letdown. The sequences are scrambled, thereby lacking a cohesiveness. The screenplay could have been constructed in an organic fashion with proper staging. Majority of the second half is fairly predictable and it doesn't have any major sequences to keep the audience glued. Although there are three villains in the film, none of them are threatening enough.

With the exception of Vijay Antony, the other characters in the film aren't sketched effectively as their intentions aren't clear. Plenty of unbelievable drama takes place once Vijaya Raghavan enters politics and those portions lack the reality, especially the climax. The action sequences are loud and jarring, as well. On a positive note, the mother sentiment angle definitely gives the film a good support and it has the potential to connect well with the masses. Kodiyil Oruvan would have appealed a lot better if it had an engaging screenplay with a few striking drama scenes, instead of settling for a cliched writing.

CAST:
Vijay Antony fits into the character of Vijaya Raghavan to an extent and his subtle performance helps elevate the film quite well. Aathmika has been cast as a template heroine character and it would have been better if she were seen in a role that had substance. Among the antagonists, KGF sensation Garuda Ram's intensifying eyes help, but he doesn't do much other than talking during a majority of the sequences. Poo Ramu, despite coming only for a few scenes, is impressive. The actress who played Vijay Antony's mother garners attention.

TECHNICAL:
Nivas K Prasanna's songs are passable, while the background score does not pack a punch as one would have hoped. In a mass commercial entertainer of this style, the background score is required to be more powerful and solid. NS Uthayakumar's visuals look functional, while Vijay Antony's cuts could have been smooth.

SO?
If you can sit through an uneven screenplay, Kodiyil Oruvan could be a good mass masala entertainer.