Pradeep Ranganathan's 'Love Today' has a great theme that is let down by the writing, which settles for easy jokes and easy sentimentality 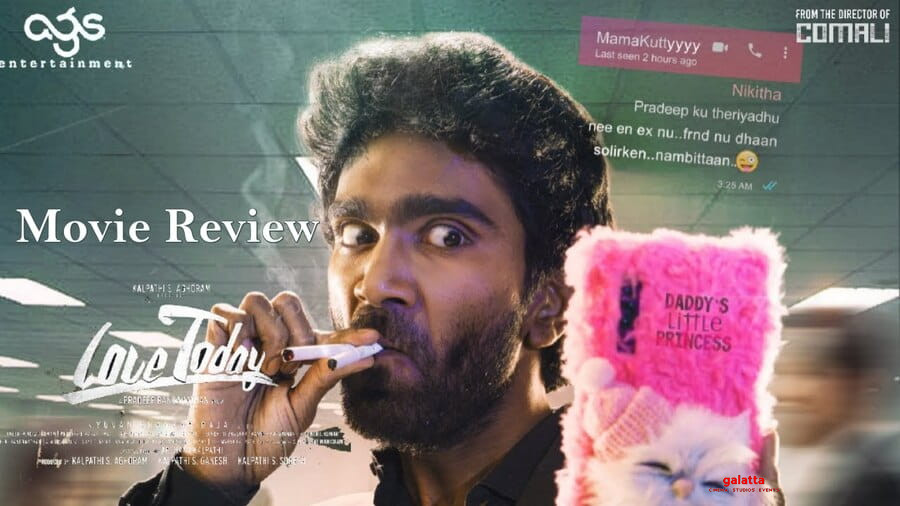 On the surface, Pradeep Ranganathan's Love Today is about the apparent shallowness of… love today. When people in earlier generations fell in love, there was the automatic assumption that the couple either fell for each other and then got to know all about each other, or they got to know about each other and then fell in love. I am not saying that the love in those generations was "pure". There was porn. When guys got together, there were extensive discussions about the anatomy of actresses. When girls got together, there was talk about the hotness-quotient of guys. And yet, as far as the couple in love was concerned, they stayed true to one another, and the relationship was based on trust.

I don't want to get all sociological on you, but maybe one of the reasons for that true-ness and trust was the fact that there wasn't as much pressure on people who were single. Even if you didn't land a boyfriend or girlfriend, you knew you'd end up with an arranged marriage – and there was no harm in that. But today, almost twenty years after Shankar's Boys had the hero sing "Enakkoru girlfriend venumada… girlfriend illa vaazhkai waste allava…", I think there is a lot of pressure among youngsters to be partnered. And that's the point we see Uthaman and Nikitha at, played by the director and Ivana. They do some sweet-talking by the beach. They get matching jewellery and matching love songs as ring tones. But they hardly seem to know anything about each other. Even the topic of exes – which is usually something people in love always talk about – seems to have been unexplored.

Now, add to this "shallow love" concept the presence of the smartphone - and you get a theme that is pure genius. It's no accident that the first time we see Uthaman, it's through his reflection on the screen of a new phone. Because that is the "mirror" through which everyone sees and evaluates themselves today. But unlike a mirror, there's more beneath the surface of a smartphone. It is possibly the most accurate record of who you really are. So when Sathyaraj, the girl's father, asks Uthaman and Nikitha to exchange their phones – that's his condition for their marriage – he is really asking them to know each other beyond the surface.

But like in Comali, Pradeep Ranganathan is better at coming up with concepts than in fleshing them out. I am not asking for a deep examination of love today, but almost every point is steered towards a joke or a cuss word or a bit of sensationalism or a urinating kid. Take Thiruchitrambalam. The premise was dark: a boy has a dysfunctional relationship with his father, he screws up his own career to spite his father, and so on. But there was also a balance of humour. The film juggled both layers beautifully. The writing in Love Today is all over the place (and also way too long). The scenes are more like set-ups for punchlines. And that's not wrong – but if you just want easy Tom-and-Jerry style gender jokes, then why pick this theme?

For a film made for today's "youth", there is a lot of surprisingly conservative material. The hero brings up the topic of virginity. The heroine seems shocked when she realises guys watch porn. A giant metaphor about a mango seed seems right of the 1960s. And the gigantically emotional climax seems to belong in another movie altogether. Another aspect that bothered me was that the hero and heroine seem so shady in some ways. He says he is making a short film and asks women to send him pictures. She has other men she calls "baby" and "darling", which is not wrong but just seems weird in the context of this movie and her character. The hero is part of a fake Instagram account used by many others to harass women. Where does one draw the line between being young and foolish, and having some kind of inner moral code?

There's a very touching scene where Uthaman's mother, played by Radhika Sarathkumar, asks him why he's chatting with other girls even after he's with Nikitha. He says the reason is that if she leaves him or cheats on him, at least he won't feel like a loser – because he has been "cheating" too. I was both shocked and saddened by this revelation. Is this what love today is like? Is this the immense pressure today's youngsters find themselves under? Is this how they reassure themselves about their self-worth? Man, it must be insane to live like that – saying that you are in love and yet sensing that you may be dumped, and therefore pursuing other openings on the side!

Pradeep Ranganathan wants to say a lot – he wants to say so much that the script spills over with flab. In a scene with a beggar, he wants to show that smartphones contribute to hypocrisy in society. In the scenes with Yogi Babu, he wants to milk easy tears from the audience by showing how smartphones can damage your self-esteem, first through an overheard conference call and later through a friends' Whatsapp group. There are  a few laughs, sure, but the real hero of the film is Yuvan Shankar Raja, whose wonderfully featherlight score makes the jokes seem better, and makes the serious scenes seem more weighty. This is also a much better production than Comali, and it has been directed better, too. But the writing is where everything stops. The film's real conflict is not the one between Boy and Girl, but the one between the theme and the way it's been fleshed out as a screenplay.

EXCLUSIVE: Comali director Pradeep Ranganathan reveals whether Love Today is based on his life - WATCH VIDEO!

Udhayanidhi Stalin's Red Giant Movies announces its next big release in Tamil - check what film it is!

Watch the fun-filled trailer of Comali director Pradeep Ranganathan's Love Today | Do not miss this!