Indra Kumar's 'Thank God', with Ajay Devgn and Sidharth Malhotra, is a dull and shallow dramedy about a man who faces his sins 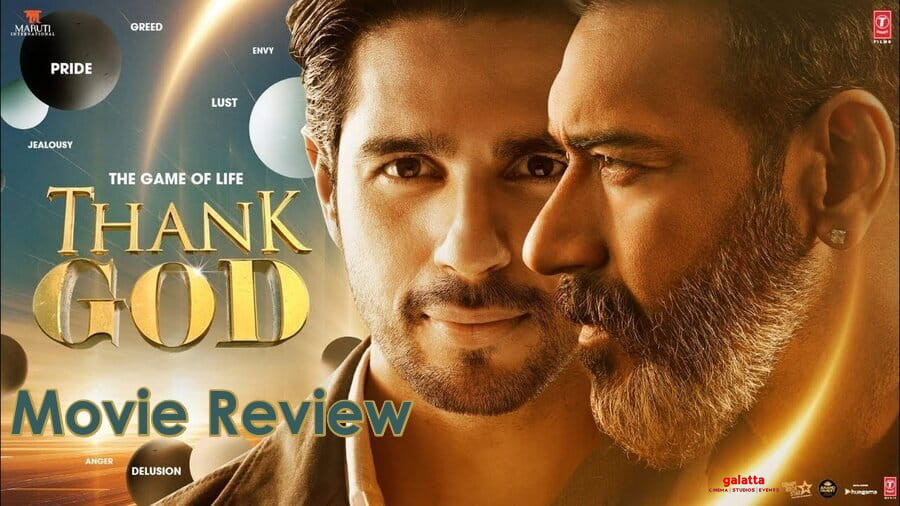 Cast : Ajay Devgan, Sidharth Malhotra, Rakul Preet Singh, Kiku Sharda,
Production : Soham Rockstar Entertainment,Maruti International
Director : Indra Kumar
Music Director : B. Ajaneesh Loknath
None of the actors find their footing, and that's fatal for the comic parts. As for the drama, it is right out of a bad old movie from the time scripts were written on the sets.

In the good old days, Hindu legend had it that after you died, your good deeds and bad deeds were evaluated and, accordingly, you were sent to heaven or hell. Today, or at least according to Indra Kumar's Thank God, this process is a Kaun Banega Crorepati-like game show, where Chitragupta, aka CG (Ajay Devgn), makes the dead soul (or the dying soul) relive a bunch of past sins or good deeds, and a live audience gets to vote. There's even the idea of a lifeline. A real-estate shark named Ayaan (Sidharth Malhotra) is the latest contestant on the game show. His "body" is in the hospital, after an accident. And as the surgery goes on, his soul has been given this chance to redeem itself. Such a premise could lend itself to comedy or drama. Thank God goes for a mix of both, and it ends up working as neither.

One of the problems of the story – based on a 2009 Danish film titled What Goes Around – is the characterisation of Ayaan. He is the kind of man who'll buy expensive offerings to Hanuman but give nothing to a beggar in the same temple. He's the kind of guy who shows little awareness of a childhood incident that seriously affected his family. He is jealous that his wife (Rakul Preet Singh) is a cop, which was his dream as a little boy. He doesn't spend time with his daughter. And so on and so forth. In short, he's a classic narcissist. Everyone else comes second. You'd think that landing up at the game show would shake him out of his self-centeredness – but no! As CG parades a list of sins, Ayaan treats it all quite literally like a game show, as if it's all a game. There is very little remorse – or even if there is, it vanishes by the time the next sin-flashback is trotted out.

I haven't seen the original, but I wonder if it was this dull, this shallow. Being shown what a bad person you are is the worst kind of punishment. Each sin, therefore, should make Ayaan self-reflect about the kind of person he is, and by the time he listens to the next sin of his, he should have evolved a little, become a little more human. But each time, Ayaan is back to square one: a cocky little shit. None of the actors find their footing, and that's fatal for the comic parts. As for the drama, it is right out of a bad old movie from the time scripts were written on the sets – only, instead of Bindu or Helen, the item number goes to Nora Fatehi. I liked the idea of the twist surrounding the accident but the leadup to it is so badly written that I couldn't care less. The only relevance of the title for me was the running time: just about two hours. Thank God!