Maju's 'Appan', with Sunny Wayne and Alencier Ley Lopez, now on SonyLiv, is an interesting drama that is better with characters than plot 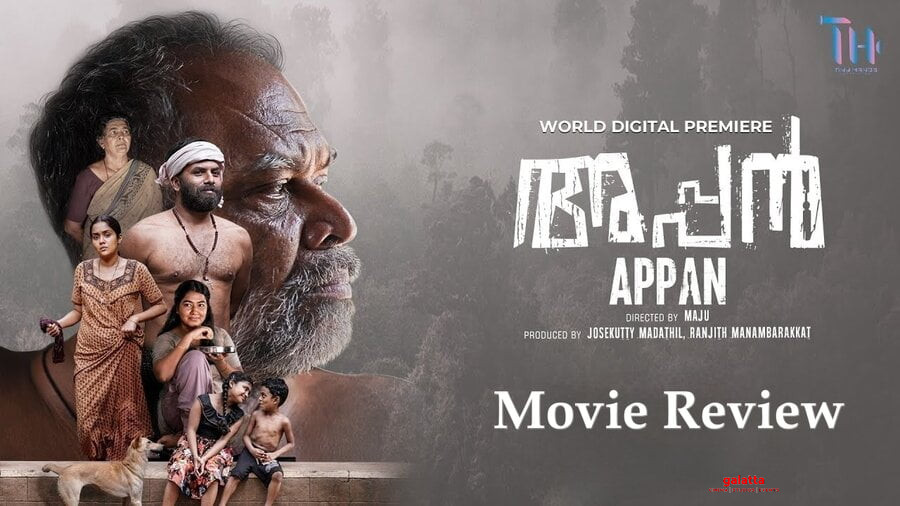 Cast : Sunny Wayne, Alencier Ley Lopez, Pauly Valsan, Ananya, Grace Antony,
Production : Tiny Hands Productions
Director : Maju
Music Director : Dawn Vincent
The film is confined to a house and the surrounding rubber plantation, which adds to the sense of claustrophobia of being locked in with a toxic patriarch.

What kind of father gives his one-year-old son some whiskey? Itty (Alencier Ley Lopez) is that kind of father. When this revelation comes out, it's not clear if it's a boast or an admission of contempt for other human beings – but it doesn't matter. This incident is just one of many that are strewn across Maju's Appan, to show that Itty is basically a horrible man. He is paralysed from the waist down, and he lives with his long-suffering wife (Pauly Valsan), his long-suffering son (Sunny Wayne) and long-suffering daughter-in-law (Ananya). Itty's grandson is probably the luckiest of the lot, as he is too young to realise the oral and emotional abuse being heaped on the family by Itty. Early on, the little boy pees in his bed, and Itty does, too. Itty's wife asks Rosy – that's the daughter-in-law – to attend to the child at once. About Itty, she's content to leave him wallowing in his own urine.

It is her small way of taking revenge on the abusive, womanising man who ruined her life. When Rosy asks her why she didn't walk away from Itty, she says it was worse at her home. The people in the village share a similar hatred for Itty, either because he has slept with other men's wives or whatever. The film is confined to Itty's house and the surrounding rubber plantation, which adds to the sense of claustrophobia of being locked in with Itty. Even the cinematography (by Pappu) offers no escape. It appears that Itty is holding on to life just so that he can continue tormenting everyone. The one time we see his wife smile is when she is dreaming about his funeral – though, later, she admits that even after death, he was ogling at the women who'd come to pay their last respects.

Appan ("father") refers to Itty, of course – but it also points to Itty's son, Njoonju (Sunny Wayne), who is a very different kind of father to his son. He has been traumatised by Itty's behaviour. And yet, as the big crucifix around his neck shows, he is a true Christian who wants love and who gives love. The film is set during the days leading up to Christmas, and you could almost make a case that Itty is the merciless Old Testament God and Njoonju is Jesus, who cried out while on the cross, "My God, why have you forsaken me?" Njoonju says that Itty has never been a father to him, and yet, some part of him yearns for Itty's love and acceptance. Sure, he loses his temper at times – but there is no hatred towards his father. The very moving final scenes are testament to that.

The title also refers to fatherhood, whether traits of one father can be passed down to another. Njoonju's worst moment occurs when his mother – in a fit of rage – accuses him of behaving like his father. Despite his best efforts, has some of Itty's toxicity seeped into him? In a stunningly cruel conversation, Itty tells Njoonju to stop whining. After all, does a hen care who its father is or how he behaves? All it does is eat and shit. Njoonju replies that that logic may apply to animals but not to humans – but then, for all practical purposes, Itty is an animal. The house has a light that cannot be turned off due to a faulty switch, and this has increased the power consumption. Itty is that light. He cannot be turned off. He sucks up all the energy around him and burns brightly at the thought of the emotional toll his actions have on others.

As far as the characters go, the film is faultless. Grace Anthony plays Itty's daughter, and her money-minded nature is evident right from her first scene, where she asks Njoonju's son if the tricycle he is riding is second-hand. (The son's name is also Biblical: Abel.) An excellent Radhika Radhakrishnan plays a sex worker who Itty visited often. In the scenes with these characters, the drama takes a turn to a peculiar type of comedy. This mix of flavours works well. The Ananya character's big plot point is also related to Christmas. She wants to go to her house for the holiday, but that will mean leaving her mother-in-law alone with Itty. All the actors give very minimalistic, empathetic performances, with Pauly Valsan being the standout. Sunny Wayne and Alencier Ley Lopez don't get characters as layered as the women do, but they get their moments.

But the plotting needed to be much stronger. There isn't a single redeeming characteristic to Itty. Yes, that is part of the narrative scheme – that this man is unadulterated evil – but when this is the only note being hit for some two hours and ten minutes, it gets tiring. Also, it's a nice idea to introduce characters and slowly show how each one has been affected by Itty, by peeling off the layers. But these remain standalone bits. There is no accumulation of emotion, and as a result, the ending doesn't hit as hard as it should. An out-of-nowhere character – representing the society outside this family – makes things worse. Given what actually happens at the end, this person was not needed at all. But flaws and all, Appan is an interesting study of a family under stress. Even when the film has wobbly feet, there is a strong relatability factor.

New fun glimpse from Arulnithi's D Block out now - do not miss this!!

New funny scene from Koogle Kuttapa is out - watch the sneak peek here!

GV Prakash lends his voice for a romantic song in Tharshan's Koogle Kuttapa!