Mathukutty Xavier's ‘Mili’, with Janhvi Kapoor, shows that even a pure 'genre film' can be elevated through superb writing 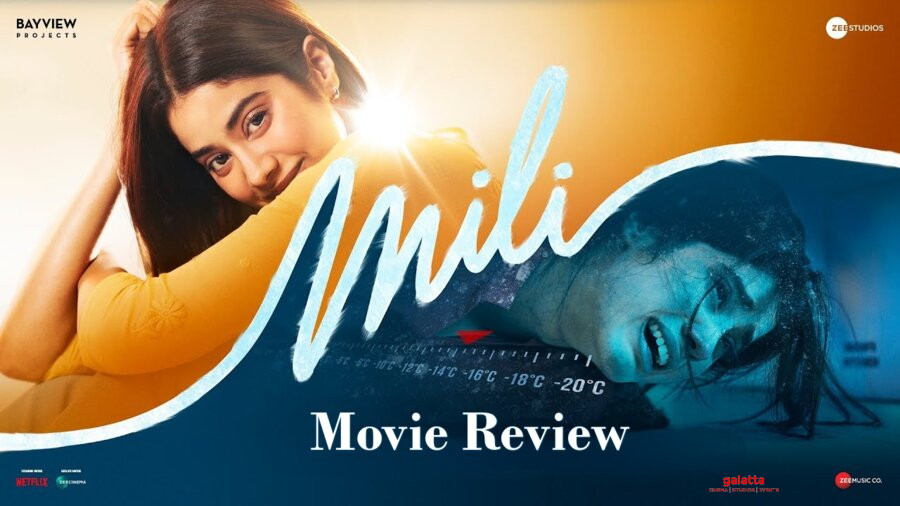 Cast : Janhvi Kapoor, Sunny Kaushal, Manoj Pahwa, Hasleen Kaur, Rajesh Jais,
Production : Zee Studios,Bayview Projects LLP
Director : Mathukutty Xavier
Music Director : A.R.Rahman
The screenplay is built like a series of mishaps that keep escalating until we get to the biggest mishap of all: getting trapped in the freezer.

On one level, Mili is what you'd call a survival thriller: something like Vikramaditya Motwane's Trapped. The protagonist is trapped in a difficult situation or a difficult space, and has to escape – using their wits or whatever. The trapping of Mili, played by Janhvi Kapoor, occurs in the freezer unit of the fast food restaurant she works in. This is the second level of the story. Mili wants to go to Canada, away from her loving father (Manoj Pahwa), to earn money – and Mili becomes a story of being careful what you wish for, because the universe may actually give it to you. She wanted to migrate to a cold, cold place and live alone. Well, she got her wish – though not in the way she wanted.

So Mili, a faithful remake of the Malayalam movie Helen and directed by the same filmmaker, Mathukutty Xavier, is not just that survival thriller. It's the story of a young girl – where she starts out and where she ends up. The ordeal in the freezer unit may be the worst one, but even before that, she has faced several ordeals. She has faced the death of her mother. She faces a father who just won't quit smoking – and though treated with a wink and a smile (mainly due to the flavourful dialogues, which are written like quick-witted banter), this mini-subplot clues us in to just how much Mili has on her hands. And slowly, her ordeals keep escalating. Her manager keeps mocking her. And she gets caught by a misogynistic cop while her helmet-less boyfriend is dropping her home.

So the film's lighting scheme, the characters' emotional arcs – all grow from warm to cold. And Mili is not perfect. She may be a good nurse, and have the sprightly attitude that shows up in AR Rahman's Main hi main hoon, which is the perfect, bubblegummy song for a young girl. But while she accuses her father of smoking behind her back, she has been seeing Sameer (Sunny Kaushal) behind her father's back. And this leads to another ordeal in a police station, and yet another ordeal when her father stops talking to her. So the screenplay is built like a series of mishaps that keep escalating until we get to the biggest mishap of all: getting trapped in the freezer.

Despite being Mili's story, the screenplay is generous to all characters, who all come off as real people. Take the misogynistic cop. The only happiness he gets is from the power he wields on weaker people, and when that is snatched away by a superior, he turns more vicious. Take Mili's boss. His attitude at work has to do with problems at home. Take Sameer. He gets a mini-DDLJ arc, where he has to prove his worth to Mili's father. Take how Mili is discovered. It is with the help of a man, who, like Mili, is locked up in an enclosed space. Even the reveals are spread out. The cops get some information, but it is a watchman who talks about it first. Even a cigarette lighter gets a bit of a character trajectory. The best touch of all may be the name Mili, which also means "found her". And of course, we know Mili will be found.

We don't really need the scene where Mili is late and her father gets impatient and honks his scooter, so he can drop her to her workplace. But later, when Mili goes missing, this impatience makes us feel the father's plight more acutely (even if subconsciously). He is not a man who likes to wait. He needs to find his daughter now. Let's look at another aspect of the father's character. He finds out about Sameer in the worst possible way, and he gives Mili the "cold shoulder", if you will — he gives her the classic silent treatment. So, later, when she goes missing, it's not just the father's panic that comes into play but also his guilt. Manoj Pahwa is a good actor, but when the writing gives you so much to chew on, the performance becomes even better.

Janhvi Kapoor does some solid physical acting — and again, the writing helps the performance. When Mili's father finds out about Sameer, she doesn't burst into hysterics. She simply lowers her eyes. There's shame, yes. But there's also strength – she holds herself together even in the worst situations, otherwise she would not be able to survive all her ordeals. And look how Sameer is introduced, as the kind of guy who will seek her out even when she won't return his calls. And see how beautifully this character detail about Sameer pays off later. Maybe Mili's attempts to escape her prison could have used a little more ingenuity? (There's no "wow" factor.) I felt that way during the movie, but thinking back, the utterly "normal" ways in which she tackles her predicament are exactly right. Again, this is not about her escape. It is about her nature, and it's a part of the character's growth-graph. In the broadest sense, Mili gives us exactly what we want: a survival drama. But dig deeper, and you see that the film is really a character study.

Makers of Ajith Kumar's Thunivu drop the trailer of their next - watch it here!!

Intriguing first teaser of Janhvi Kapoor next is now here - remake of this superhit movie!!

On this Onam day, here are 10 Malayalam films that are special and close-to-heart for Tamil people!

JANHVI KAPOOR's next film is officially announced and it is with a National Award winning filmmaker! Check Out!