Liju Krishna's 'Padavettu', with Nivin Pauly and Aditi Balan, is a powerfully cinematic story of an unlikely saviour 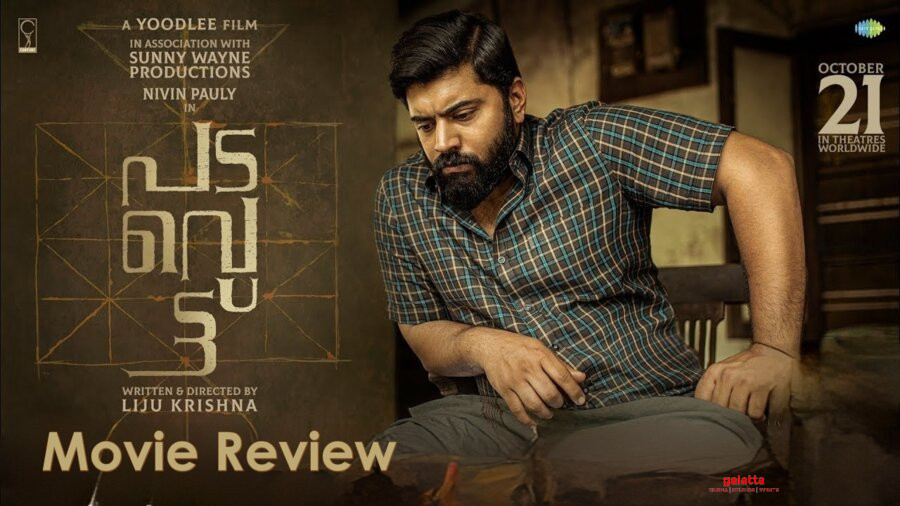 Even if we want to stay away from politics, politics has a way of entering our lives. This is, loosely, the core of Liju Krishna's Padavettu. When we first meet the protagonist Ravi, played by Nivin Pauly, he is an idler. He has not been able to get over the after-effects of an accident in the past, and his joblessness is the object of much ridicule in his village, named Maloor. He lives with his aunt, superbly played by Remya Suresh. She is no silent victim of patriarchy. She is a sharp-tongued woman who gives as good as she gets – she's one the most alive characters in the film. But even she has not been able to change Ravi's attitude to life. His only relief is seeing Shyma (Aditi Balan), whenever he goes to sell milk at the society.

Nivin Pauly, with his bulky frame, gives an excellent performance that comes in two flavours. Throughout the first half, we are unable to read this man. We see a few minor things: the rage during a fight, or the small smile when he looks at Shyma. But whatever he is thinking, he keeps it to himself. It's all internal. In order to discuss the second flavour of Nivin's performance, we have to talk about the plot point about a party that's trying to get a foothold in Maloor. They rebuild Ravi's house and put up a plaque in front, saying that they "sponsored" this house. This is clearly a metaphor. One, it shows how people like Ravi's aunt are dazzled by freebies from political parties. (Who wouldn't want a new house for free?) And two, the party has, in a way, acquired a piece of land in Maloor. Ravi and his aunt may be living in that house, but everyone is going to see it as something the party built. The party has, in effecct, set up shop there.

And we return to the core of the narrative: Even if we want to stay away from politics, politics has a way of entering our lives, our very homes. And we get to the second flavour of Nivin's performance. This time, everything is external. He has snapped out of his inertia, and we can read him now. When he helps a neighbour track down a wild boar, it's not just a heroic deed.  We see him empathising with the man's frustration. (A quietly effective Shine Tom Chacko plays the neighbour.) When Shyma asks him if he is okay with her past, we sense his reaction even without a word being uttered. And speaking of Shyma, she doesn't have a big part to play. But she adds to the film's themes when she tells her father that she will decide what's best for her. She doesn't want others taking over her life, the way the party took over Ravi's home.

The very first shot tells us that this is a supremely well-made film. Ravi is gazing at the moon, lost in nostalgia, and the camera snakes around him as though he is the only person on earth – which he is to himself. Govind Vasantha's unique music is more than just a "background score". If the cinematographer Deepak D Menon gives us landscapes and people-scapes (i.e., painting-like still-life shots of farmers), Govind gives us soundscapes. He uses low frequency droning and a lot of percussion, along with human sounds like panting and insect sounds like buzzing, and it sounds like nothing you have heard. It becomes a part of the DNA of Ravi and every other character, especially the villain, the politician played by Shammi Thilakan.

The second half goes a little off the rails. The two story strands – that of Ravi becoming the saviour, and that of the party's continuing efforts to exploit farmers – don't feel organically united. But it's a superb touch that the spark that ignites Ravi is the rebuilding of his house and the constant reminder that he owes his new life to the party. This unwanted "debt" is what makes him seek self-respect again. The political games are the things that revive him, and even his decision to help his neighbour acquires a political tone on top of the emotional tone: we have to stay bound as a community to resist external exploitation. Taken as just a story, Padavettu is not exactly new. But taken as cinema, it is a brilliant demonstration of how the various parts of the art form, when fused intelligently, can make a powerful statement that we've heard before, and need to keep hearing again, and again.

Official: After a long gap of 2 years, Aditi Balan announces her second film!