Abhishek Sharma's tedious 'Ram Setu', with Akshay Kumar as an atheist archaeologist, is an adventure only in name 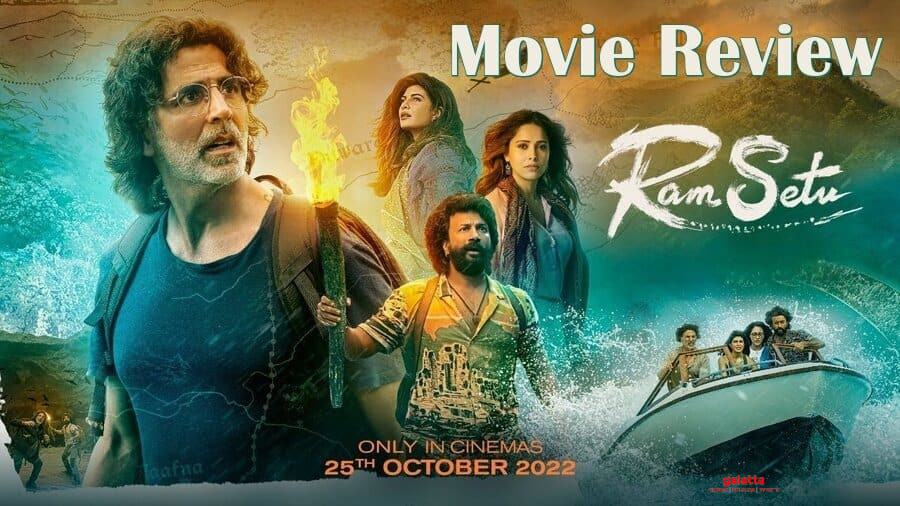 Cast : Akshay Kumar, Jacqueline Fernandez, Nushrratt Bharuccha, Anngad Raaj,
Production : Amazon Studios,Cape Of Good Films,Lyca Productions
Director : Abhishek Sharma
Music Director : Daniel B. George
The film doesn't even reach the slickness of 'Raiders of the Lost Ark', which was released in 1981. I mean, 40 years on, have we not reached the same level of visual effects?

Adam's Bridge, also known as Rama's Bridge or Rama Setu, is a chain of natural limestone shoals that links the south-eastern coast of Tamil Nadu and the north-western coast of Sri Lanka. Geological evidence suggests that this bridge is a former land connection between India and Sri Lanka. I took this information from Wikipedia, which I think is more than the people who made this film did. Abhishek Sharma is the writer-director. He wants Ram Setu to be like Raiders of the Lost Ark, with Akshay Kumar as an atheist-archaeologist like Indiana Jones. A shipping company owner wants part of the bridge destroyed for easier passage, and the Akshay character is called to investigate whether the bridge was really built by Lord Rama, as is widely believed, or it's just, as Wikipedia says, a naturally formed "chain of limestone shoals".

The hero's name is Aryan Kulshreshtha. If you break up the surname (kul + shrestha), it means one who belongs to the best lineage. As for Aryan, let's not even get started. Names and places play an important role in subliminally rooting the film in a religious zone. Aryan's wife, played by Nushrratt Bharuccha, is Gayatri, which is also the name of a Hindu mantra. Her parents live in Banaras. Satyadev Kancharana appears midway – midway in the story, and midway between the bridge – as someone who helps Aryan, and his boat is named Chiranjeevi. Heck, at that point, I knew who he was, while Aryan sits around blankly, as if he thought the man was a fan of the Telugu superstar. Forget archaeology, has Aryan even read Amar Chitra Katha? Along for the ride is Jacqueline Fernandez. Her name is Sandra Rebello, but I was more interested in her occupation. She plays an environmental scientist, but I think she's really employed by Max Factor to test how indestructible their makeup is. I mean, Sandra swims through an underwater tunnel, braves a storm, runs through a jungle with machine guns firing at her, and her hair and lipstick remain intact.

The film doesn't even reach the slickness of Raiders of the Lost Ark, which was released in 1981. I mean, 40 years on, have we not reached the same level of visual effects? The underwater "research" done by Aryan and team is so unconvincing, as are the "proofs" that he produces before the Supreme Court. (By the way, apparently, you can just walk into Supreme Court proceedings the way you'd walk into a restaurant. The doors are always wide open.) At least in Raiders, they actually found the Ark. Here, Aryan finds a plant he thinks is Sanjeevani. And because it is not native to Sri Lanka, it must have something to do with the Ramayana. Or something like that. The screenplay is a disaster of epic proportions. It even – very randomly – includes the Civil War in Sri Lanka. And by the end, Aryan implies that we have saved "Muslim" structures like the Qutub Minar and Taj Mahal, so we should not disturb Ram Setu.

Okay, boss. Have it your way. But along the way, just give us some good action, some good adventure, no? A supposed action sequence involving a storm and Aryan losing control of his submarine is so badly executed that I began to feel bad for Ram Setu. I mean, the poor bridge was just lying there, minding its own business for centuries, and now it has to put up with Aryan's unintentional comedy with a floating rock and an aqua-suit that looks like a robot in a Japanese automobile plant. I felt sorrier for our mythology, with fascinating aspects like the worship of Ravana in Sri Lanka being reduced to afterthoughts. In the end, the so-called evidence that Aryan gets is of practically no use, because the judge rules that belief need not be "proved". Hell, then why did I just watch this movie?

Akshay Kumar plays an archaeologist on a mission to save India's heritage in Ram Setu - action-packed trailer!!

Lyca Productions make big announcement on their next film with this Superstar!