Suriya's Etharkkum Thunindhavan directed by Pandiraj and produced by blockbuster production-distribution house Sun Pictures is currently in its final stages of post-production. On Friday, the makers surprised fans with the announcement that the upcoming mass rural action family entertainer will be releasing in theatres worldwide on February 4, 2022, while also releasing a glimpse teaser showing Suriya shaking feet to composer D. Imman's foot-tapping folk beats. In that light, the Etharkkum Thunindhavan teaser also carried the surprise announcement that leading Tamil actor-producer Sivakarthikeyan has written a song in the film, while the other lyricists have been revealed to be Yugabharathi and director Vignesh Shivan. Check it out below: 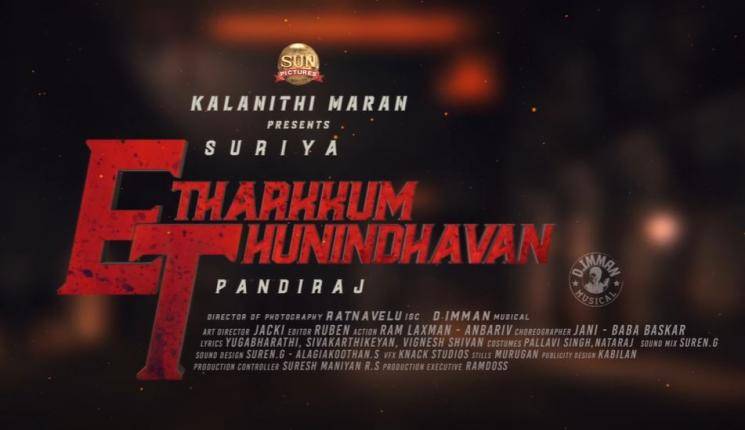 Expectations surrounding Etharkkum Thunindhavan are massive as it has Suriya appearing amidst a rural backdrop after a long time. Excitement for the film is paramount as it also marks the first time Suriya is acting in a full-fledged role under Pandiraj's direction after he produced the blockbuster director's Pasanga 2 (2015) and Kadaikutty Singam (2018) under his 2D Entertainment banner. The buzz for Etharkkum Thunindhavan has shot up once again, especially after the release date announcement teaser that was unveiled earlier today, with all sights set on the next leg of promotions.

Etharkkum Thunindhavan has a huge ensemble star cast starting with Doctor sensation Priyanka Arul Mohan as the heroine, while veteran actors Sathyaraj, M. S. Bhaskar and Saranya Ponvannan have been cast in pivotal roles and are joined by Vinay Rai, Ilavarasu, Subbu Panchu, Dhivya Dhuraisamy, Master and Bigg Boss Tamil 5 fame Ciby Chandran and Vada Chennai star Saran Shakthi. Composer D. Imman, who delivered chart-busters in rural action films like 'Thala' Ajith's Viswasam and 'Superstar' Rajinikanth's Annaatthe, is expected to come up with a cracker of an album for Etharkkum Thunindhavan, which has in its technical team names like cinematographer R. Rathnavelu and editor Ruben.