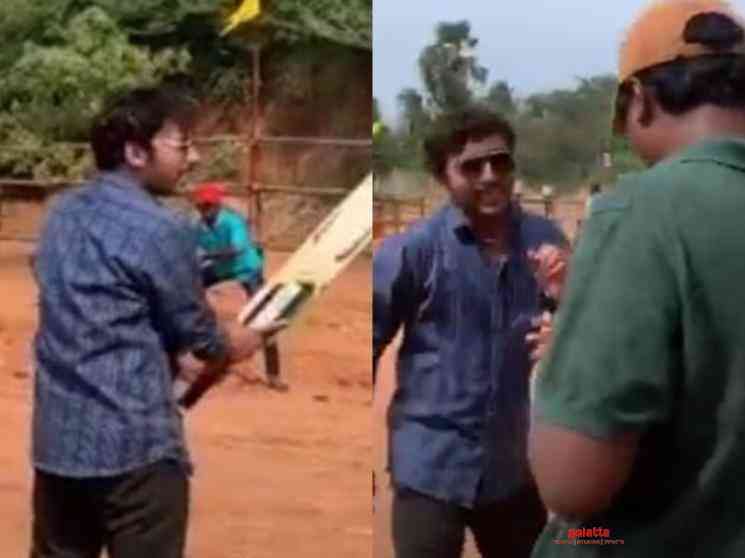 RJ Balaji is a happy man these days post the thunderous response to the trailer of his directorial debut, Mookuthi Amman, starring Nayanthara in the lead role. All set to premiere on Disney+ Hotstar on the festive occasion of Diwali on November 14, RJ Balaji has directed the upcoming Hindu devotional comedy film along with NJ Saravanan, which has been described to be a revival of the genre that enjoyed a huge popularity in the 80s and 90s.

Mookuthi Amman is currently one of the hottest films and is being eagerly awaited by fans, especially after the delightful trailer that was unveiled by Hotstar a few days back. As the film is now complete and RJ Balaji is back to doing commentary in the ongoing season of the Indian Premier League (IPL 2020), the actor turned director has now posted a video of him playing cricket along with the Mookuthi Amman crew during the shooting at a location presumably outside Chennai. The video, which shows RJ Balaji playing cricket and eventually arguing an out decision with fellow crew members, is funny and has gone viral since being posted on Twitter. Check it out below:

After hitting the bullseye as a hero in last year's political satire LKG, RJ Balaji will be looking to taste a bigger success with his Mookuthi Amman, which was initially slated for a worldwide release on May 1 after production came to a wrap in February earlier this year. The film was billed to be delight for theatre-going audiences and it came as a major disappointment for many after it was revealed that it would not be hitting screens in the wake of the coronavirus pandemic crisis.

Mookuthi Amman, which will see RJ Balaji also starring alongside Nayanthara, includes a talented supporting cast featuring veteran artistes Moulee and Urvashi, followed by Bigil fame Indhuja, Thadam heroine Smruthi Venkat and Iruttu Araiyil Murattu Kuththu stars Gautham Karthik and Yashika Aannand. Girish Gopalakrishnan is scoring the music for the film, with Dinesh Krishnan serving as the cinematographer and 'Stunt' Silva in charge of the action sequences. Selva RK is the editor, while Divya Nagarajan and Anu Vardhan are the costume designers with Vijayakumar serving as the art director.