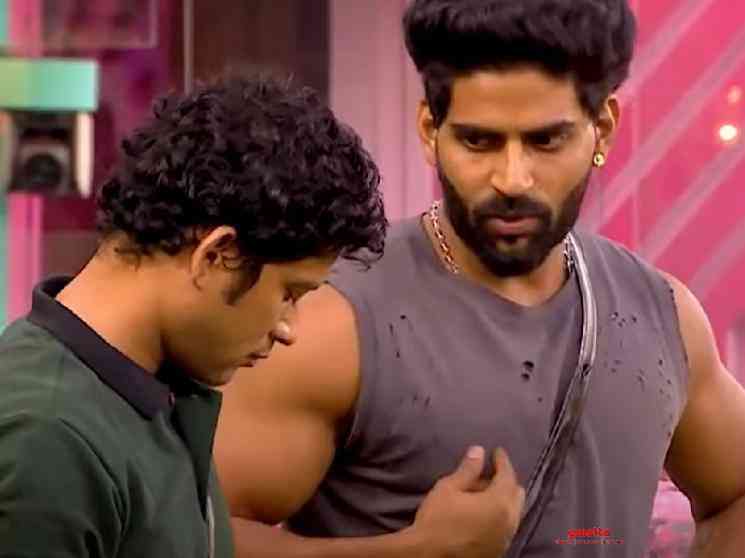 In today's (December 22) earlier released promo of Bigg Boss Tamil: Season 4, we saw a glimpse of a new task given to the housemates and it seemed like a fun game. The housemates were asked to catch the balls in different sizes that would be thrown to them through a pipe. The housemates were asked to divide themselves into two teams. During the game, we saw Rio arguing with Aari about Balaji's game. Rio felt that Aari and Balaji dominated and never gave the space for other housemates to catch the ball. Following that, Vijay TV has now released the second promo for tonight's episode and this one is a follow-up of the first promo.

Here we see Som Shekar accusing Balaji of foul play in the ball catch task and on the other side, Aari and Balaji find fault with Rio and Som. From what we see in the promo, it looks like Rio, Som, and Gabriella are one team, and Aari, Balaji, and two more people are in another team. Though the arguments don't heat up, it looks like there are several disagreements and miscommunications between the housemates. The promo, however, does not manage to excite the audience and we will have to wait for some more time to know what is going to be interesting about tonight's episode.

Towards the end of the promo, Balaji feels pissed and disappointed about the way the game is played. Meanwhile, five contestants have been nominated for this weekend's eviction process and it includes Aari, Aajeedh, Anitha Sampath, Gabriella, and Shivani Narayanan. It goes without saying that Aari will be saved since he has managed to solid support from the masses. It was believed that Aajeedh will be evicted this week, but after seeing Anitha's reaction and argument with Aari, people feel Anitha should be evicted this week.

Is it going to be Aajeedh or Anitha? Let us keep our fingers crossed and wait for the weekend episodes to know the final results. For now, check out the newly released promo of Bigg Boss 4 here: