Ajith fans must be the happiest, right now! Yes! Wonder, why? Well, there is a reason. Ajith is currently busy shooting for his next film, Valimai and his fans have always been asking for some sort of an update from the makers ever since the film went on floors. However, the producer of the film, Boney Kapoor has maintained silence and everyone knows about it and the fans were quite sad about not hearing much about their favourite star’s film. In a surprising turn of events, the film’s music director Yuvan Shankar Raja has shared a super mass update that has excited the fans already. Yes! Yuvan Shankar Raja launched his music company’s (U1 Records) new website, u1records.com today (February 10) and he shared some interesting details about Valimai’s music on the website.

Yuvan has officially confirmed that there is an introduction song for Ajith Kumar in Valimai and it will be a high energy dance number with solid folk beats. The song has been written by popular director and lyricist, Vignesh Shivan and interestingly, he has written a song for an Ajith after the chartbuster number, ‘Adhaaru Adhaaru’ from the Gautham Vasudev Menon directorial, Yennai Arindhaal. Talking about the intro song in Valimai, Yuvan has mentioned that festival drummers from Orissa have been roped in for the song and he promises it to be an ‘ecstatic mass song’. Earlier, the Orissa drummers were used by Anirudh Ravichander for the ‘Marana Mass’ song from Superstar Rajinikanth’s Petta and we know the massive success of that song.

It looks like Yuvan Shankar Raja has already got a winner in hand and it is going to be a visual treat to see Ajith dance to the song. We are sure that the fans are going to go crazy when they witness the video song on the big screens. Talking about the Valimai intro song in simple words, Yuvan was quoted as saying, “Ethu oru Seriyana mass song!”. This update has come as a big sigh of relief for the Ajith fans who were constantly requesting producer Boney Kapoor for an update. Valimai will feature Ajith in the role of a police officer and the film is touted to be an intense action drama.

The film is directed by H Vinoth of Theeran Adhigaaram Ondru and Nerkonda Paarvai fame and has Huma Qureshi playing the female lead. RX 100 sensation Karthikeya plays the key antagonist. Valimai is scheduled to release in theatres, later this year. 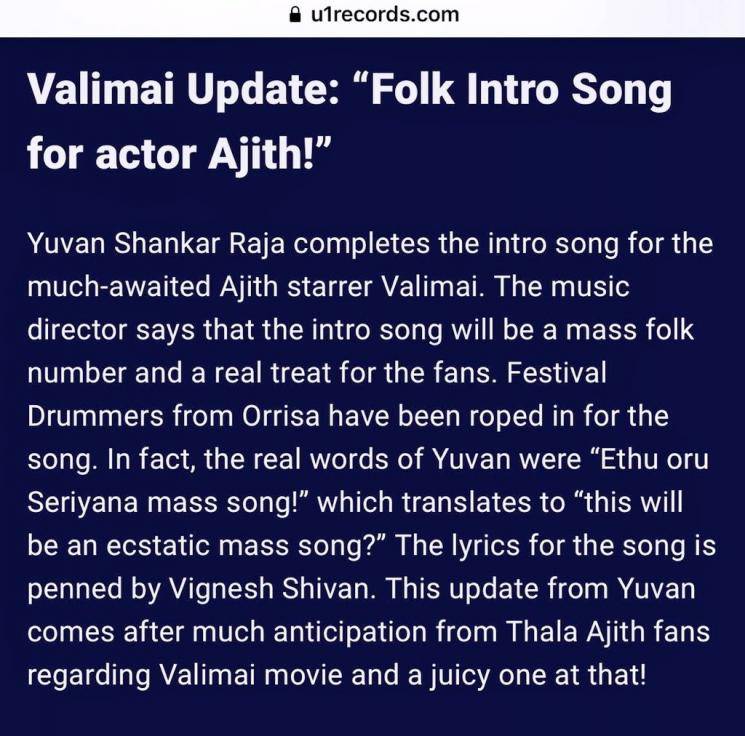 Kaathuvaakula Rendu Kaadhal's New Poster is out | Samantha VS Nayanthara!