Popular radio jockey turned singer Suchitra has now made an important decision and it has been garnering attention from the netizens. The talented musician has now decided to quit all the social media platforms, in order to concentrate more on her professional and personal space. It also looks like she wants to stay out of the negative and hateful comments, as well. Suchi took to her official Instagram page to post a story that read, “Going off social media, starting with Instagram. To the few followers who still bear goodwill towards me - thanks for the support and love... as we wait for Instagram to process my delete request... thank you #TamilNadu for, well, everything”.

Additionally, Suchi has also deleted all her posts from her Instagram page and there are 0 posts as of now. The Twitter page has also been deactivated. Suchitra’s exit from all the social media forums has come as an unexpected move and the fans are now eager to know about her next commitment in her professional space. Let us wait for a few more days or weeks to get better clarity on the same. Suchitra took part in the recently concluded fourth season of Bigg Boss Tamil, in which actor Aari Arujunan was declared as the title winner. Suchi’s gameplay received a mixed response from the audience.

Suchi also created a huge buzz on social media after making controversial comments against Ulaganayagan Kamal Haasan and the makers of Bigg Boss for certain reasons. Suchi seemed to be pissed off about her Bigg Boss experience and she even took a dig on other contestants like Balaji Murugadoss, etc. Notably, Suchitra did not take part in the Bigg Boss Kondattam show which was aired last week on Vijay TV. Except for Suchi, everyone else was seen and it looked like something was not right between her and the makers of the show. 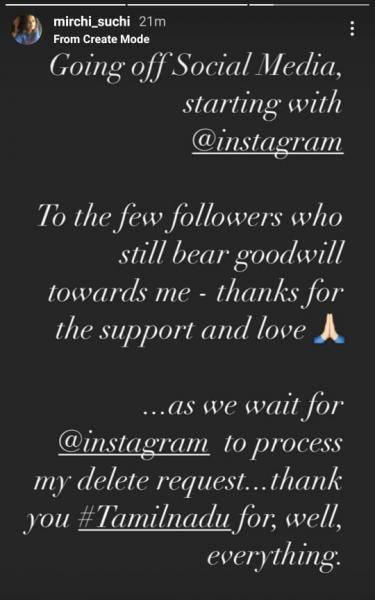 Title and first look poster of Gautham Menon's next film RELEASED - check out!

R.I.P.: Actor Rajiv Kapoor passes away due to cardiac arrest!