Anudeep KV's 'Prince', with Sivakarthikeyan and Maria Ryaboshapka, applies the 'Jathi Ratnalu' formula to a love story and falls flat 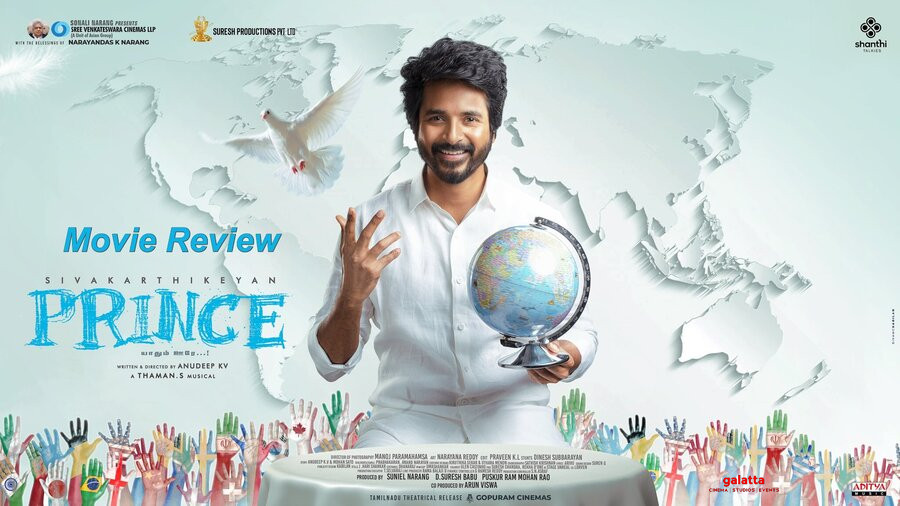 Cast : Sivakarthikeyan, Maria Ryaboshapka, Sathya Raj, Premgi,
Production : Sree Venkateswara Cinemas LLP
Director : Anudeep K.V
Music Director : Thaman S
The star is in his zone, but the film is a chain link of missed opportunity after missed opportunity. Even the slapstick fight is not as slapsticky as it should be.

Anudeep KV's USP is silliness. In Jathi Ratnalu, he roped in three actors: Naveen Polishetty, Priyadarshi and Rahul Ramakrishna. And he used these actors as punching bags for his brand of brilliantly nonsensical one-liners. I took some time to warm up to the film, but once I got on its wavelength, it became a blast. Anudeep treats silly situations in a silly way. He also treats serious situations in a silly way. Even when we think we are in for major melodrama, he keeps undercutting the mood with humour. He goes for the same approach in Prince, but this time, it doesn't work. Why? The first reason may be Sivakarthikeyan. This is right up the actor's zone and he is excellent, but he is also too big a star. This film may have worked for him before Kedi Billa Killadi Ranga, but today, after his rapid ascent to the top, we expect something a little… substantial, something big-screen worthy.

That, sadly, happens only during the songs by Thaman, which are grandly staged. Otherwise, the film is an oddly small, TV-level affair. (Again, with a smaller actor at the centre, it might not have seemed so small.) And we come to the second reason Prince doesn't work. In Jathi Ratnalu, Anudeep's anything-goes sensibility was a perfect fit for an anything-goes story. Here, the story is actually about something – or many things. It's about the irrelevance of caste and borders between countries. It's about the importance of humanity, which is possibly why the Sivakarthikeyan character is named Anbu. It's about how the British still own Indian soil – or land. And it's about Anbu falling for a Brit named Jessica, and played by Maria Ryaboshapka. This romance is opposed by Anbu's father (Sathyaraj) because of, well, what the Brits did on Indian soil.

What surprised me – and not in a good way – was the earnestness with which Anudeep approaches these issues and messages. In a film with this tonality, who wants to hear (from Jessica) that the British left behind a legacy of good things, too? Who wants a borderline-serious subplot with Premgi Amaren as a shady real-estate dealer? Why inflate the self-importance of a meant-to-be-silly film with key events taking place on January 26 and August 15? Why get all melodramatic with the Sathyaraj character in the second half? Yes, a lot of this is intercut with silly lines – in the spirit of the overall film – but this technique doesn't always work.

The stretch with guest star Soori is a bomb. A bit woven around Charlie Chaplin is a bomb. A potential fight scene in a sports bar is a bomb. The flashback with Jessica's grandmother is a serious bomb. The strange characterisation of her father is a bomb. Jessica's "boy bestie" gag is a bomb. At one point, she asks Anbu why he loves her. Good question. The script is too lazy to think up an answer.

Prince is a chain link of missed opportunity after missed opportunity. Even the slapstick fight is not as slapsticky as it should be. I loved the sudden appearance of a cactus plant, but it doesn't do anything as crazy as it sounds. What's not bad? There's a not-bad sequence with Anandraj as a cop. There's a Monty Python-esque stretch (or Goundamani-Senthil-esque strech) about a vegetable. And like in Jathi Ratnalu, the hero gets to make a big, rousing speech that's filled with funny, nonsensical touches. This portion is the only one where the issues and the silliness come together organically, and the tricky mix is beautifully handled by the writing. And I loved the hero-entry scene. You think it's going to be one thing. It cleverly becomes something else – and you can't imagine anyone but Sivakarthikeyan pulling this off. But Prince is proof that likeability on screen is not enough to make a movie.

Sivakarthikeyan's Prince - a detailed SWOT Analysis! Check out the strengths and threats of the movie here!

LATEST: Sivakarthikeyan reveals if he will act as a villain - check what he has to say!

Will the October magic continue once again for Sivakarthikeyan with Prince? Read to know the full story!

Sivakarthikeyan opens up on what went wrong in Seemaraja - a detailed analysis by SK!

With Sardar VS Prince clash on cards, here's the list of Karthi's previous Diwali clashes! Check out!