Pushkar-Gayatri’s 'Vikram Vedha', with Saif Ali Khan and Hrithik Roshan, is a smart action film that struggles when it tries to get philosophical 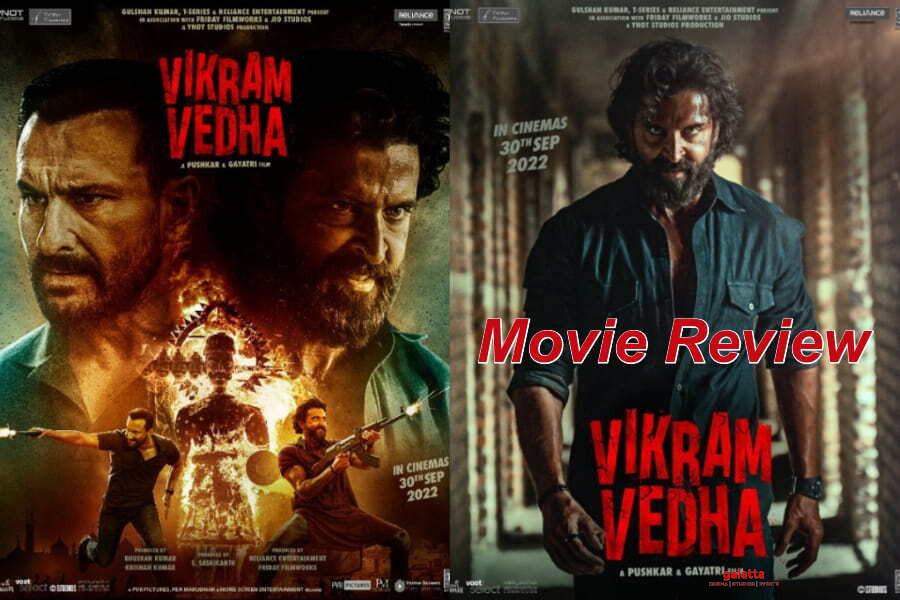 The latter half of the title of Pushkar-Gayatri’s Vikram Vedha belongs to the gangster played by Hrithik Roshan in one of his best performances. In the Tamil original, Vijay Sethupathi played this character in his customarily casual fashion. What Hrithik brings is a scruffy beard, tons of star power, and a genuine touch of madness. The film has a line that you can make out from the eyes whether someone is good or bad. Hrithik's eyes tell us he's both, and the demented quality in his gaze is due to the good in him battling with the bad in him. Even before we set eyes on this character – and it’s a while into the movie before he swaggers in – he’s something of a legend. Cops speak in awe of his exploits. And when news gets around that he has surfaced, it feels like Satan himself has emerged from his underground lair.

Any self-respecting masala movie would pit a god against this demon – and indeed, the character playing the first half of the title does come across a saviour. Saif Ali Khan is intensity personified. You can feel the knots in his stomach, and the bigger knots in his very clever brain. He’s an encounter cop, but he’s able to sleep guiltlessly because he’s convinced the men he’s pumping bullets into are bad men who deserve to die. But slowly, the paint starts peeling away. Rather, the colour of his tees undergo a change – from white (indicating his purity) to darker shades. He knows now that it isn’t a clear-cut line between good and evil.

The notion that trigger-happy cops and gangsters are but two sides of the same coin isn’t new: Michael Mann’s Heat is a brilliant exploration of how a cop who thinks he is doing good may be more messed up than the gangster. But Pushkar-Gayatri have decided to tell their story through the prism of the Vikram/Vetaal folklore – hence the title. The film opens with an animated stretch with the king Vikramaditya, whose back the Vetaal latches onto. The creature begins to narrate stories that have a moral conundrum at the end. Much later, in a shot in a jeep, Vedha, who’s in the back seat, quite literally appears to be on Vikram’s back as the latter is driving. And boy, does he tell stories. Structurally speaking, this is a terrific idea. Each one of Vedha’s stories is used to launch a flashback, and in addition to reshaping Vikram’s notions of morality, each one of them provides clues to understand what Vedha is up to and why.

As characters, I didn’t buy a second of Vikram or Vedha - and that's fine. They are more constructs, or conceits designed to propel the narrative along the lines of the Vikram-Vetaal folktale. But I wished the directors had used this remake opportunity to fix some of the issues in the original. Vikram is presented to us as a scarily upright man, and yet, his unpleasant learnings about himself don't lead to any internal hand-wringing like, say, Arjuna in the Mahabharata before the start of the big war. Vikram's wife (Radhike Apte) could have been built up better. At least, her conflict of interest in representing Vedha could have been addressed better. A character excessively interested in money remains as underwritten as in the earlier film. And the big face-off at the end seems more like a cool shot than good and evil at a point of confusion. Because, by then, Vikram and Vedha have bonded and become something like buddy cops out of a Hollywood movie.

The first half is practically a photocopy, but the second half becomes bigger and "massier" – and thus, there's actual juice being extracted from the pulpy premise. The Alcoholiya song is great fun on the big screen, and an action block just after the interval is superbly choreographed. They've wisely retained Sam CS's theme music, and thanks to cinematographer PS Vinod, there isn’t one uninteresting frame in this narrative set in Lucknow and Kanpur. Seen as just an action movie, Vikram Vedha is cleverer than the ones we usually get. But like the Tamil original, the moral angles in the story make you want more than just shootouts and solutions from simple clues. But the stars do their job, and their shine rubs off on the film. The pleasures of Vikram Vedha lie on the surface, and sometimes, when done smartly, that's quite enough.

Hrithik Roshan reveals how his role will be different from Vijay Sethupathi in Vikram Vedha - Official statement here!

Exciting new glimpse of Vikram Vedha revealed - do not miss!!