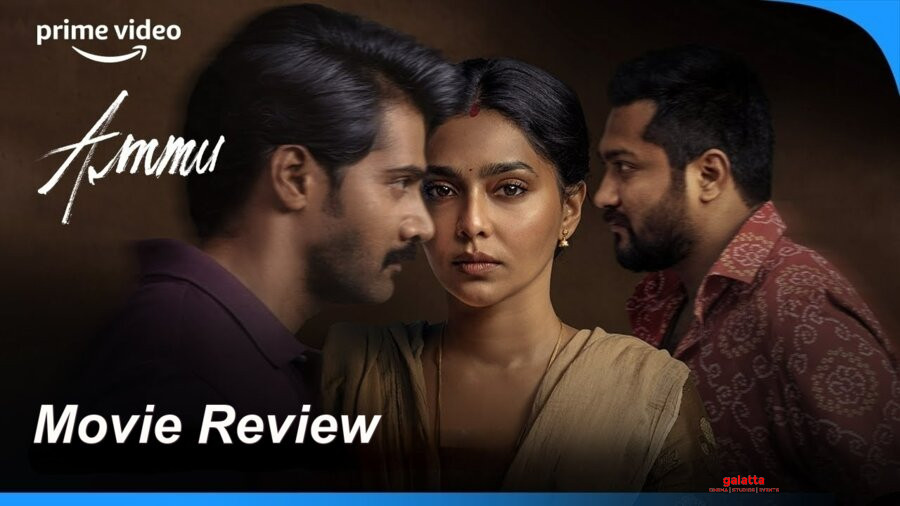 Charukesh Sekar's Ammu opens with an arranged marriage scenario. Ammu (Aishwarya Lekshmi) is brought in front of Ravi (Naveen Chandra) and his family. There are no doubts about the alliance, as the families live in the same neighbourhood and know of each other. It's just a formality. Ravi's mother tells Ammu to behave as she normally would. But something about the occasion makes Ammu more subdued than she'd usually be. Earlier, she wondered whether she liked Ravi. The answer was tentative. "I think so," she says. Now, the elders ask the couple-to-be to stand next to each other. She still has an "I think so" look. In a startling cut, we move from this scenario to Ammu and Naveen after marriage, after they've just had sex. Like many scenes in the film, this is reflected in a mirror, which acts as a distancing device. What we are seeing is real – and yet a lie.

At first, everything is okay, and it doesn't take long for Ammu to go from "I think so" to "I love you". And then, the beatings begin. Ravi is a cop who advises an abused woman who comes to his station to be strong. And yet, at home, he cannot shake off his patriarchy. When Ammu asks for something as innocent as a sewing machine, he says a man should not live off his wife's earnings. Soon, we discover he is also a man who wants lunch to be brought to the station. And it becomes worse. Every time he crosses the line, he says sorry. But soon the word becomes meaningless. Ammu talks to her mother about this. It's a lovely little scene that makes us see that the mother may be more progressive than the daughter.

Why does Ammu stay? Why doesn't she just walk out? These are easy questions to ask, but life for the abused is not always that easy. One of the problems with the screenplay is the over-reliance on dialogue to tell us what Ammu is feeling, what's going on inside her head. "How did I become this person?" That sort of thing. It becomes clumsy after a while, especially when you see how elegantly the film is crafted. (Apoorva Shaligram is the cinematographer.) There's a cut from Ammu in daylight, outside of home, to Ammu that same night, back at home. Her face is in the same profile, in the same position, in both frames. It's as though nothing has changed except time. She is back to where she was. Aishwarya Lekshmi is a little off in the big dramatic scenes, but she's wonderful at conveying small shifts of emotion with just a look or two.

The first half takes a long time to underline Ammu's situation – and the scenes, though effective, are fairly predictable. The real subversion occurs in the second half, where the tonality changes. Suddenly, we are in a film like the Alia Bhatt-starrer Darlings. Ammu doesn't just want out of the marriage. She also wants revenge. And with this plot point, the film goes rapidly downhill. Darlings was a dark comedy, and the fantasy-zone revenge aspect worked very well there. But here, the post-interval portions, where Bobby Simha appears as a killer, don't sit organically with what happened earlier. The director maintains the same gentle and tasteful tone, and Ammu's big decisions don't hit home as powerfully as they should. I came away wishing the risks in the conception, in the writing, in the very theme, had reflected in the execution.

Mammootty's next film gets a super mass title - intriguing new poster out | Find out here!

SURPRISE: Cook with Comali gets 3 new comalis | Watch the epic reactions of the existing comalis here!

Sad news for Cook with Comali fans - promos confirm the absence of this star comali!

Here is a super happy news for all the Cook with Comali fans! Exciting Update!