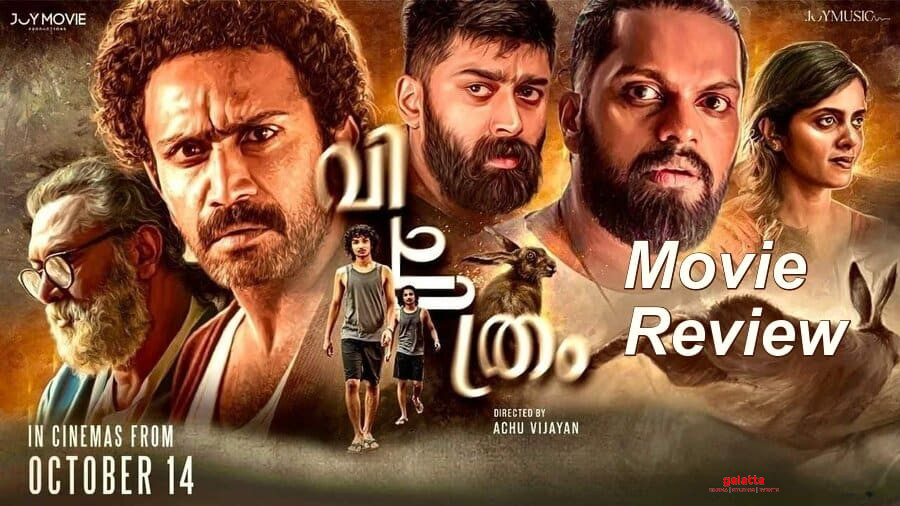 Cast : Shine tom chacko, Lal, Jolly Chirayath, Ketaki Narayan,
Production : Joy Movie Productions
Director : Achu Vijayan
Music Director : Arun Muraleedharan
This is not the kind of movie where a family moves into a haunted house and starts experiencing jump scares from SCENE 5. This is – first and foremost – about a family haunted by issues.

Achu Vijayan's Vichitram is built on a supernatural framework, and right from the first frame, there's an otherworldly quality to the images. We see swaying arms. We see the tip of a paintbrush pressed on a canvas and we hear the squishy sound of paint. And then, we see a gentle smile. We hear about a big house that has a big history. It's just the kind of creaky old mansion you'd find in a horror movie. Only, Vichitram is not a "horror movie". It's a ghost story – or rather, it is a story about ghosts. Look at the way Jasmine (Jolly Chirayath) prepares two cups of tea. She drinks one, and leaves the other for Paul, her husband, whose picture hangs on a wall. Habits are ghosts, too. They stay with us long after people are gone. Some of us slowly forget the dead. Jasmine remembers Paul every day. We make ritual offerings to the dead. Why not a casual cup of tea?

Almost until interval point, this is a film about a family. Jasmine has five sons, the oldest being Jackson, played by Shine Tom Chacko. He is a no-gooder, who is always looking for the next get-rich-quick scheme. Shine underplays this character nicely, so we see not just the external cockiness that Jackson projects but also his internal desperation and vulnerability. Similarly, we get to know the other four sons through very specific traits (Nikhil Ravindran is the writer), and we also get to know a seventh character that hangs over the family like a ghost. It's money. The family owes a lot of people a lot of money and they are constantly reminded about it: by a moneylender, by their landlord, by Jasmine's brother who wants her to move to her ancestral home. Jasmine laments that she has to work in a bakery to support the family, despite her five sons. At least if one of them had been a daughter, Jasmine could have shared her sorrows with her.

There is, actually, a daughter in this story – played by Kani Kusruti. Along with Jasmine, this character, named Martha, results in the film's two best performances. If Jasmine is filled with strength, Martha is like a delicate flower. If Jasmine is outspoken, perhaps the result of having to raise five sons, Martha hardly opens her mouth. She lives inside her head, inside her imagination. If Jasmine is a working woman, Martha has the luxury of being an artist. If Jasmine boldly walked out of her house with the man she wished to marry, Martha is unable to find a solution to her romantic problem. Jolly Chirayath and Kani Kusruti bring to life two exquisitely written women who are a study in contrast: one rough and practical, the other obedient and dreamy.

This is the reason Vichitram works so well. As much as the supernatural elements, the human elements are given so much importance. This is not the kind of movie where a family moves into a haunted house and starts experiencing jump scares from SCENE 5. This is – first and foremost – about a family haunted by various issues, and my favourite scene is the one where Jackson mellows down a bit and apologises to his mother. The lead-up to this scene and the way it ends – that is, the "in" to the scene, and the "out" of the scene – are brilliantly written, mixing both the fear of ghosts and the remorse of human behaviour , along with elemental feelings like thirst. As Jackson leaves the scene, we see his brother behind him, sleeping on a sofa – this brother is out of focus, like a ghost. The occasional "jump cuts" in the screenplay – where we are suddenly pushed to the next scene – add to our disorientation.

As for the explicitly ghostly aspects of the film, there are rumours of a man who keeps talking to a dead woman. There's a mysterious necklace. There's the appearance of fire and water, both in the past and the present. There are identical twins, two female rabbits that keep trying to escape their cage, and a lovely image of two women in a mirror. Then there's Lal, a broken man who grows bonsai plants and prunes them carefully – they may be a metaphor for how he likes to control those who live with him. The cleverest aspect of Vichitram is how the supernatural events are explained away so simply and so movingly, by the end. A song contains these lyrics: Enikilla varnangal nee tharumo. (Translation: Will you give me the colours that are missing in my life?) As many of us know, yearning is a kind of ghost, too.