WOW: Is this the title of Atlee's next film with Shah Rukh Khan? - Exciting Deets out!

Director Atlee is currently busy working on his fifth film and he has joined hands with Bollywood Badshah Shah Rukh Khan for this mega biggie. The fans have pinned high hopes on this film and it surely is one of the most anticipated films of this year. The makers have kept the updates under wraps for various reasons and the fans have been waiting to know interesting tidbits about the project. That being said, the title of this SRK - Atlee film has been circulating on social media since last night and here are the details about it. The film has reportedly been titled, Jawan and the teaser of the film is already ready to be released.

The teaser seems to have been censored recently and a picture carrying the censor certificate details of the teaser has been doing wide rounds on social media since last night. The censor certified teaser runs for 94 seconds (1 minute 34 seconds) and the information has gone viral among the fans. The teaser is rumoured to release very soon on YouTube and that will give us a glimpse of what the film is about. It is indeed interesting to know that the film is titled Jawan, but let us wait for an official confirmation from the makers.

Produced by Gauri Khan's Red Chillies Entertainment, Jawan will feature Lady Superstar Nayanthara essaying the female lead alongside SRK, marking her debut in Hindi cinema. Sanya Malhotra and Yogi Babu play pivotal roles in the film that has cinematography by GK Vishnu who worked with Atlee in Mersal and Bigil. Shah Rukh Khan's next film will be Pathan, directed by Siddharth Anand of War fame. Pathaan, also starring John Abraham and Deepika Padukone, is set for its grand theatrical release on January 25, 2023.

Shah Rukh Khan is also working on Dunki, one of his upcoming projects helmed by blockbuster filmmaker Rajkumar Hirani. Dunki, featuring Taapsee Pannu as the female lead, is set to hit the screens on December 22. 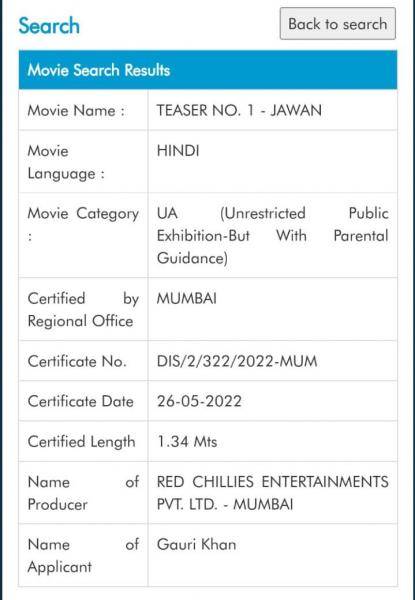 WOW: Shah Rukh Khan announces his next big film with this blockbuster filmmaker!

A.R. Rahman and Suriya mourn the passing of late singer KK - check out what they had to say!