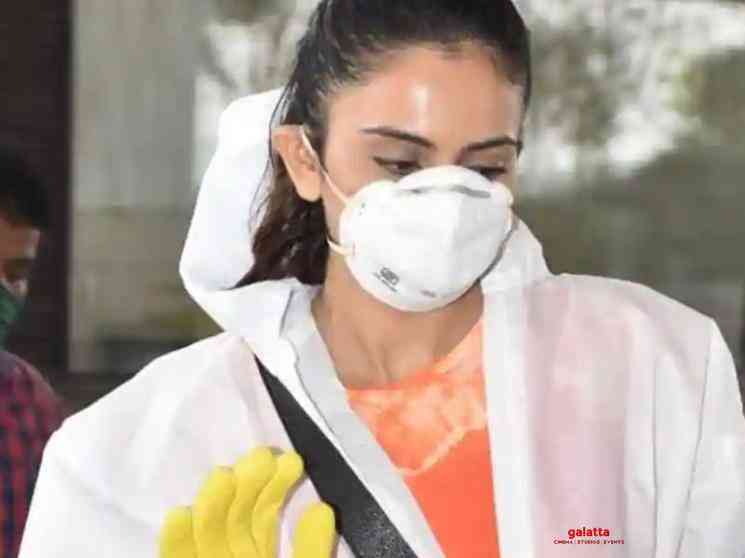 Actress Rakul Preet Singh has tested positive for the Covid-19 Corona virus and she took to her official social media page to share the news with her followers and well-wishers. The NGK actress revealed that she is doing fine and requested people who came in close contact with her in the past few days, to get tested. Rakul's official statement read, "I'd like to inform everyone that I have tested positive for COVID-19. I have quarantined myself. I am feeling fine and will rest up well so that I can be back at shoot soon. Request everyone who met me to kindly get yourself tested. Thank you and Please stay safe,".

Rakul's fans have shared their positive messages on social media and they're praying for her speedy recovery. Rakul was shooting for her upcoming Hindi film, May Day in Hyderabad for the past few days. May Day is directed and produced by Ajay Devgn who is also acting as the lead protagonist. Amitabh Bachchan also plays one of the leads. With Rakul now being tested positive for the virus, the team of May Day will undergo the Covid-19 test for safety reasons.

On the professional front, Rakul Preet Singh has several exciting projects in her lineup. She will be seen playing the female lead in John Abraham's Hindi film, Attack, directed by Lakshya Raj Anand. In Tamil, Rakul has two exciting biggies that are in different stages of production. She plays the female lead in Sivakarthikeyan's highly anticipated sci-fi thriller, Ayalaan, directed by R Ravikumar of Indru Netru Naalai fame. Rakul is said to have got a crucial role to play in this film that deals with the concept of alien invasion. Produced by 24 AM Studios, the film has music scored by AR Rahman and cinematography by Nirav Shah.

The talented actress is also a part of director Shankar's magnum opus, Indian 2, which features Kamal Haasan in the lead role. Rakul plays an important role in this political drama that also features Kajal Aggarwal, Siddharth, Priya Bhavani Shankar, Vivekh, Bobby Simha, Nedumudi Venu, in the star cast. Her last release in Tamil was Suriya's NGK, directed by Selvaraghavan. Let us wish that Rakul recovers very soon from the virus and gets back to shooting. Check out her latest statement below: