Vijay's Thalapathy 65 is currently in the final stages of pre-production and the film's shooting is expected to start very soon. The film will be directed by Nelson who made his debut in Tamil cinema with the Nayanthara starrer, Kolamaavu Kokila. Nelson's second directorial film is Doctor which has Sivakarthikeyan and Priyanka Arul Mohan playing the leads. Doctor is scheduled to release in theatres for this year's Ramzan festival in May and Thalapathy 65 will mark Nelson's third directorial. The film is produced by the esteemed production house, Sun Pictures and this is the company's second outing with Vijay after Sarkar.

Vijay's recent choice of directors has been fascinating and interesting - it started off with Lokesh Kanagaraj who made Master and now the pattern continues with Nelson Dilipkumar. Vijay's idea to collaborate with promising young talents is indeed exciting and it also tells us that the star actor wants to be a part of quality films. Very recently, the makers announced that Pooja Hegde will be playing the female lead, as the love interest of Vijay and the news went viral on social media. Thalapathy 65 will mark the return of Pooja to Tamil cinema after 9 long years - with her last film being Mugamoodi.

While the fans were eagerly waiting for some sort of an update from the makers of Thalapathy 65, popular dance choreographer Jani Master had a super exciting surprise for them. Yes! Jani Master, who will be choreographing the songs in the film, took to his official Twitter page to share an exciting update about the shoot plans. Jani Master revealed the rehearsals for the song shoot will begin on April 24, while the song sequence will be shot with Vijay and others from May 3 - May 9. This update excited the fans and it instantly became viral on social media. However, in a matter of few minutes, Jani Master deleted the tweet due to obvious reasons.

It looks like the production side, Sun Pictures, or director Nelson will be making an official announcement regarding the same. Jani Master's deleted tweet read, "All excited to join #Thalapathy65 team. Thanq #Thalapathy @actorvijay sir @nelsondilipkumar sir for believing in me. will surely make the opportunity totally worth it. Rehearsals for a super crazy song begins on 24th April & shoot to commence from May 3rd - 9th @sunpictures". 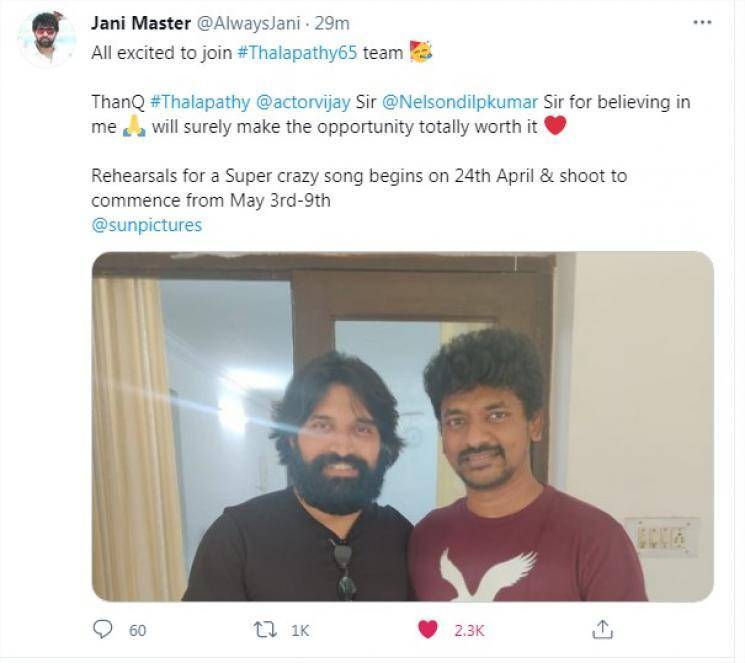