Bigg Boss Tamil season 4 ended on a high note last month, with the hit reality TV show's recent edition turning out to be yet another big success story for Vijay TV and its streaming partner Hotstar. Actor Aari Arjunanan went on to emerge as the title winner after battling it out in the Bigg Boss 4 house for 105 days, with Balaji Murugadoss declared as the first runner up, followed by Rio Raj, Ramya Pandian and Som Shekar coming in next. Bigg Boss Tamil 4, which began in October last year, included a number of highlights and one among them was actor Satiiysh Saarathy Sasho, who was the voice often interacting with the contestants, while also giving them tough tasks to participate in as per host 'Ulaganayagan' Kamal Haasan's instructions, including grilling them with challenging questions in the show's confession room.

Satiiysh Saarathy Sasho had a mighty big role in Bigg Boss Tamil season 4 from the start to the end, by being the only outside voice after host Kamal Haasan, who interacted with the contestants on a frequent basis. The contestants would confide and share their personal feelings and emotions with the Bigg Boss 4 voice each time they were presented with an opportunity. Bigg Boss Tamil 4 kicked off with 16 contestants among who included Velmurugan, Rekha Harris, Sanam Shetty, Jithan Ramesh, Suresh Chakravarthy, Samyuktha Karthik, Aranthangi Nisha, Som Shekhar, Aari, Rio Raj, Shivani Narayanan, Balaji Murugadoss, Gabriella Charlton, Aajeedh, Ramya Pandian and Anitha Sampath, with Suchithra and Archana joining in later as the wildcard entrants. Bigg Boss 4, turned out to be a sensational success, with the many memorable incidents still etched in the minds of fans, who continue to debate on social media and compare with the show's earlier editions.

In that light, Bigg Boss 4 sensation Balaji Murugadoss recently posted a comment on one of Satiiysh Sarathy Sasho's videos on Instagram, which has grabbed the attention of fans everywhere. In the video captioned "who are you", we see Satiiysh addressing fans and asking them regarding acceptance and validation from others, while also posing them with a query as to whether they first acknowledge who they are. We see many fans asking him to speak in his trademark Tamil that everyone fondly remembers from Bigg Boss 4, with Balaji too chiming in. Bala posted a comment saying, "Ena anna epdi irukinga" (translation: Hi anna how are you), which has since received a big response. Check out the screenshot of Bala's comment on Bigg Boss 4 voice Satiiysh Sarathy Sasho's Instagram video below: 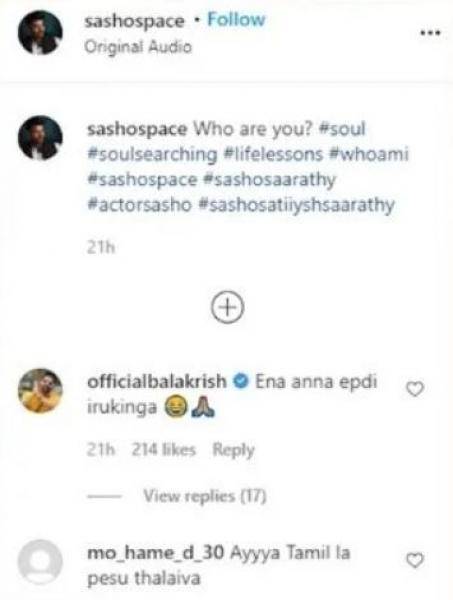 Apart from Bigg Boss Tamil season 4, Satiiysh Saarathy Sasho's credits include the 2014 biopic Manjunath, B.A. Pass 2  in 2017 and 2018's Kahanibaaz. He has been based out in Bollywood and is known for portraying Manjunath Shanmugam in the Manjunath biopic.

After Master, Arjun Das to play the hero in this critically acclaimed director's next!