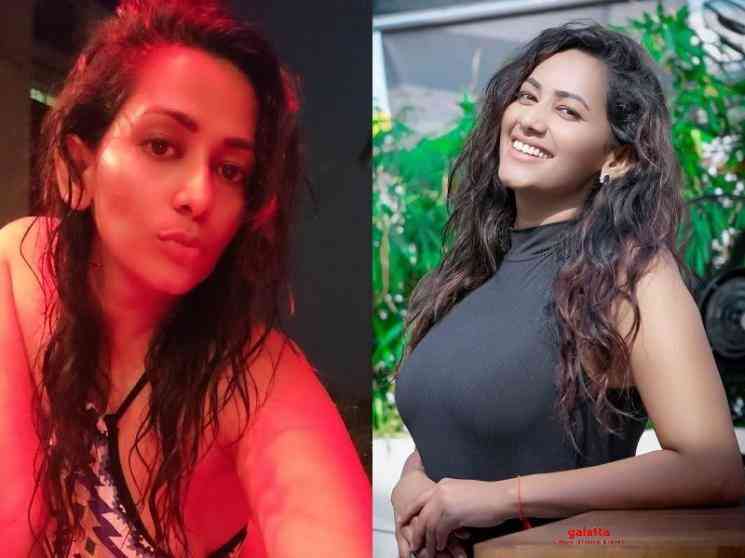 Popular Tamil actress Sanjana Singh enjoys a big youth fan base, with her photoshoots time and again receiving a huge response. Known primarily for her role in Suriya's 2014 film Anjaan directed by Lingusamy, the sultry siren has been in Goa where she has been vacationing with her family. Taking to her Instagram page, Sanjana posted new pictures of herself in a swimsuit at a swimming pool, which have since taken social media by storm. "Vacation in Goa with family , good morning beautiful soul, happiness is within you, love yourself & enjoy the moment", she wrote captioning her latest set of pictures in her new steamy photoshoot.

Debuting a decade back in 2009 in Renigunta, Sanjana Singh has since made a special appearance in the Hindi film, Thoda Lutf Thoda Ishq, in 2015. Some of her notable roles in Tamil also include as a drunk Telugu lady in the blockbuster 2011 film Ko, starring Jiiva under KV Anand's direction. She has made appearances in films like Kadhal Paathai, Mayanginen Thayanginen, Marupadiyum Oru Kadhal, Ragalaipuram, Vetri Selvan, Vingyani, Iravum Pagalum Varum, Sakka Podu Podu Raja, including a cameo in Vishnu Vishal's Velainu Vandhutta Vellaikaaran. Apart from the Suriya and Samantha Akkineni starrer Anjaan, Sanjana's next big notable role was the box office blockbuster Thani Oruvan starring Jayam Ravi, Nayanthara and Arvind Swami in the lead roles.

Sanjana Singh enjoys a big following on her social media pages and shares a good rapport with her fans. Often sharing pictures and videos of her gym workouts, she has also expressed herself to be a travel enthusiast and posts pictures of her journeys to various destinations across the country and around the world. Below are the pictures from her Goa vacation: