Leading South Indian actress Samantha Ruth Prabhu observed strange activity on her official Instagram account on the night of Monday, July 4. The star usually posts photos and videos on her social media handles, with her latest post raising eyebrows among many of her fans, who then began sharing the screenshots asking if her page had been hacked. Shortly after the news gained traction, Samantha's digital manager, Seshanka Binesh issued a clarification informing followers that the actress' Instagram account had indeed been hacked.

Taking to her Insta Stories, Seshanka wrote, "Due to a technical glitch, a post on Instagram got erroneously cross-posted on Samantha's account." She added, "We are working on the cause and shall escalate the same with team Instagram. Apologies for any confusion caused on the same." Upon Samantha recovering her social media account, the actress cross-posted her manager’s Instagram Story. Check out the statement below: 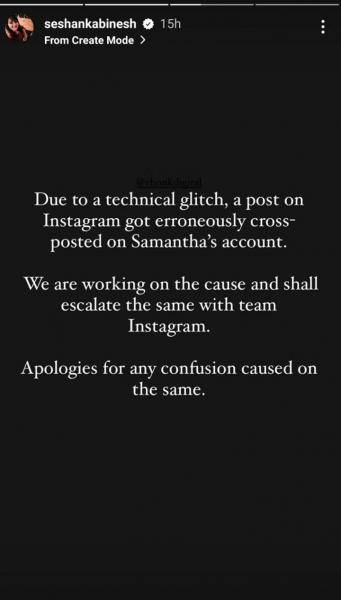 On the work front, Samantha will be making an appearance for the first time on blockbuster Bollywood filmmaker Karan Johar's talk show, Koffee With Karan Season 7. Last seen on the big screen in Vignesh Shivan's rom-com Kaathuvaakula Rendu Kaadhal alongside Vijay Sethupathi and Nayanthara, the actress is currently attached to an untitled Dream Warrior Pictures banner venture in Tamil. Samantha also has in the pipeline the mythological film Shaakuntalam and Kushi Vijay Deverakonda under Shiva Nirvana's direction in Telugu, followed by the pan-Indian science fiction thriller Yashoda, and her international debut titled Arrangements of Love under Downton Abbey fame Philip John's direction.

Big News: Samantha's next big project after Kaathuvaakula Rendu Kaadhal is revealed and it is with this energetic star!

Vijay Deverakonda and Samantha injured in a car accident? - Official Clarification Statement out!

Suriya's Soorarai Pottru gets honoured yet again - check out this amazing feat!

James Cameron promises Avatar 2 will be so long that it is 'okay to go pee' during it!!