One of the most popular South Indian actresses, Samantha Akkineni has maintained her place at the top of the league steadily for more than a decade. Having starred in a number of blockbusters in Tamil and Telugu, Samantha is all set to make her debut on the digital space as she is starring in the second season of the hit Amazon Prime Video series, The Family Man. Starring Manoj Bajpayee and Priyamani in the lead roles, Samantha will be playing a role with grey shades, with the actress now getting a customised emoji on Twitter for the hit series.

Samantha has now become the first South Indian actress to be getting a Twitter emoji ahead of the premiere of The Family Man season 2. It is to be noted that Priyanka Chopra was the first Indian actress to get a customised emoji for her film, The Sky is Pink. An elated Samantha took to her Instagram Story to express her excitement and happiness on the latest special honor bestowed on her and wrote, "Got my first ever emoji. How fun" along with the hashtags "#TheFamilyMan "TheFamilyMan2 "TheFamilyManOnPrime". This latest recognition for Samantha comes after both ‘Thalapathy’ Vijay and Suriya got Twitter emojis for their films, Master and Soorarai Pottru, respectively.

The Family Man is a Hindi web series streaming on Amazon Prime Video produced and directed by the director duo Raj & DK. A teaser for The Family Man season 2 was released a while back and featured Samantha, which drew a massive response from her fans. Post-production works are currently underway at an active pace for the OTT series, with plans to begin streaming it soon. Samantha is said to be playing one of the antagonists on the show, with the actress frequently updating fans on social media about how excited she has been to be a part of the project.

On the film front, Samantha recently began shooting for the highly-exciting Kaathuvaakula Rendu Kaadhal under Vignesh Shivn's direction. The upcoming romantic comedy Tamil film being produced by Lalit Kumar's 7 Screen Studios in association with Vignesh Shivn's Rowdy Pictures also includes 'Makkal Selvan' Vijay Sethupathi and Nayanthara in the lead roles, with music by 'Rockstar' Anirudh Ravichander. Apart from Kaathuvaakula Rendu Kaadhal, Samantha is also expected to team up for a project with Maya and Game Over director Ashwin Saravanan, which is speculated to be yet another thriller. Check out Samantha's announcement on The Family Man season 2 emoji in her Instagram story below: 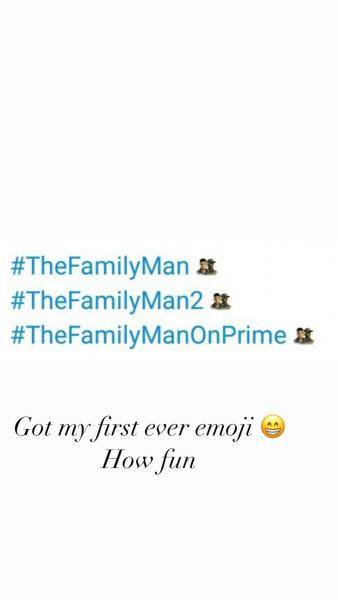 Siraj's 5-for gives India a foxy 338-run target to chase!