Leading South Indian actress Rashmika Mandanna posted a photo of her arm on Tuesday after she recently underwent laser treatment. The youth sensation took to social media to share a picture in which her arm looked a little reddish and also informed fans of the negative factors that go into being an actor. Posting the image on her Instagram Stories along with a sad Pokemon sticker, Rashmika wrote, "Any of you want to become actor for just the good part of it.. don't. There is a lot that goes into it. For example the n number of times you have to get laser done. Damn it hurts so bad." Below is Rashmika's Insta Story: 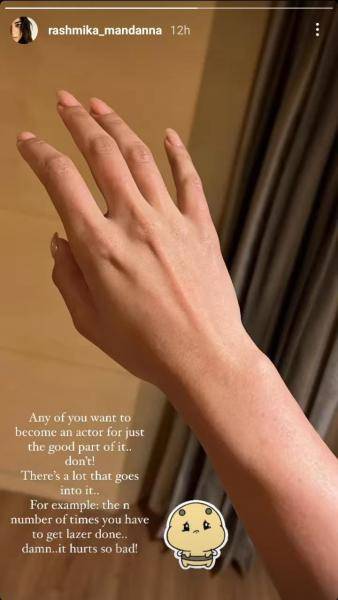 Rashmika, who was declared by Google last year as the National Crush of India, is at the heights of her popularity with her appearances alongside leading superstars in blockbuster films. Her most recent release, the pan-Indian film Pushpa: The Rise, has her paired opposite Stylish Telugu star Allu Arjun, with the action drama turning out to be a raging money-spinner at the box office. Directed by Sukumar, the film produced by Mythri Movie Makers in association with Muttamsetty Media, also stars National Award-winning Malayalam actor Fahadh Faasil in a pivotal role, with his character to be expanded as the main antagonist in the sequel titled Pushpa: The Rule.

As for her upcoming projects, Rashmika will be next seen in Telugu in Aadavaallu Meeku Joharlu opposite Sharwanand, with the rom-com being directed by Kishore Tirumala under Sudhakar Cherukuri's SLV Cinemas banner also featuring Khushbu, Radhika Sarathkumar and Urvashi in pivotal roles. The Dear Comrade actress will once again reprise her role as Srivalli in Allu Arjun's Pushpa: The Rule, which is being planned for a late 2022 release. Rashmika is also set to make her Bollywood debut in the spy thriller film, Mission Majnu, featuring Sidharth Malhotra in the lead role. She recently was announced to be joining legendary actor Amitabh Bachchan in Goodbye, which began production in April this year.

OFFICIAL: Sathyaraj roped in to play a pivotal role in Comali director Pradeep's next film!