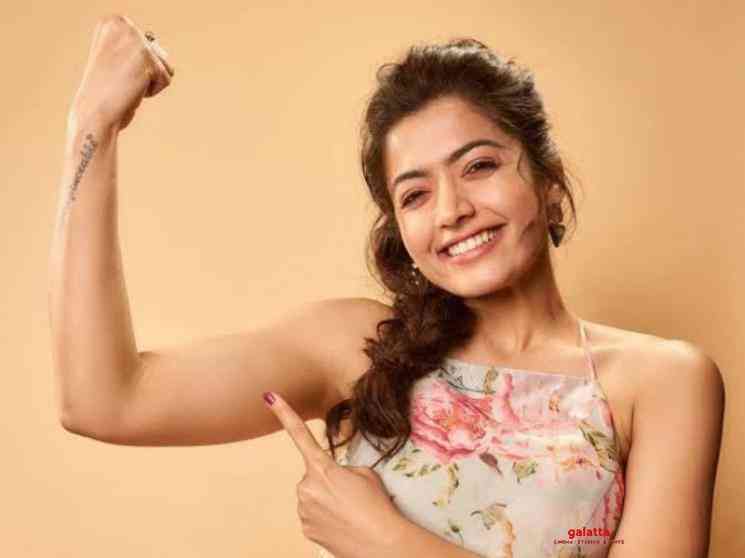 Actress Rashmika Mandanna became a sensation across South India ever since she entered cinema and has risen to the top of the league in less than five years since her debut in the Kannada film, Kirik Party. The popular actress soon became a major crowd puller in Kannada and Telugu films, while also garnering a huge fan following in Tamil Nadu despite no single Tamil release to date. In that light, Rashmika has now taken the next big step and will now be making her big Bollywood debut in the Sidharth Malhotra starrer Mission Majnu under Shantanu Bagchi's direction.

Taking to her Twitter page, Rashmika dropped the bombshell announcement saying she is "super glad and excited to be a part of the new journey!". Sharing the Mission Majnu first look poster featuring Sidharth Malhotra, the Geetha Govindam actress tweeted saying the film is "inspired by real events and the story of India’s most daring RAW mission inside Pakistan!". Billed to be "the untold story of India's greatest covert operations", Mission Majnu is being produced jointly by Ronnie Screwvala's RSVP and Amar Butala and Garima Mehta's Guilty By Association banners and has been written by Parveez Shaikh, Aseem Arrora, and Sumit Batheja.

Rashmika's association in Mission Majnu is her next big shot at national fame after she was recently recognized as the 'National Crush of India' for 2020 by search engine giant Google. The Dear Comrade actress will also be making her Tamil cinema debut opposite Karthi in Sulthan, which has been directed by Remo fame Bakkiyaraj Kannan under the Dream Warrior Pictures production banner. Sulthan wrapped up filming in October, with the makers releasing two posters, including one that featured Rashmika, with the film being planned for a big theatrical release. She is also awaiting the release of her upcoming Kannada film, Pogaru, which has her playing the female lead opposite Dhruva Sarja.

As for her ongoing projects, Rashmika is currently attached to 'Stylish Star' Allu Arjun's Telugu action drama Pushpa, which will reportedly see the superstar play the role of a red sandalwood smuggler. She also was recently announced to be starring in another Telugu film titled Aadaalloo Meeku Johaarlu, opposite Sharwanand. There is also a strong buzz that Rashmika will likely be paired in a film opposite Akhil Akkineni to be directed by Sye Raa Narasimha Reddy fame Surender Reddy, with an official statement still awaited.