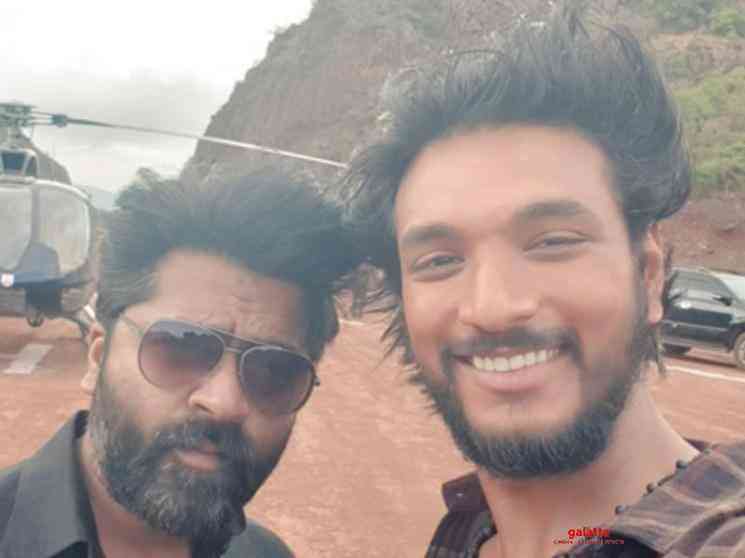 There's new life in Silambarasan TR and that has been quite evident over the past few months as the flamboyant star has been making his presence felt in a strong manner in the minds and hearts of fans. Simbu, who has begun preparations for his pilgrimage to Sabarimala, had been a part of an upcoming venture said to be a remake of the blockbuster Kannada film Mufti, which is being produced by K. E. Gnanavelraja's Studio Green, with the reputed banner now dropping the massive announcement that the title launch of the project will finally be taking place on December 24.

Taking to their social media pages, Studio Green officially announced that their upcoming 20th venture also featuring Gautham Karthik alongside STR will be directed by Sillunu Oru Kaadhal fame Krishna. They wrote on Twitter, "We are glad & proud to have the trend setter of our ages  @SilambarasanTR_ and the Heart throbe  @Gautham_Karthik joining forces for our 20th project !!  "Sillunu oru kaadhal"s, Jillana director @nameis_krishna is the captain of this ship! #Studiogreen20 @kegvraja  Bless us!". It is to be noted that the film had begun production in early 2019 under Mufti fame Narthan's direction, who has since left the project. The original neo-noir action thriller film featured Kannada superstar Shiva Rajkumar playing the role of a gangster, with Srimurali as an undercover police officer. Although not much is known about the Tamil version, the title launch announcement poster hints at the film’s story set in Kanyakumari and the southern districts of Tamil Nadu. Check out Studio Green's announcement:

We are glad & proud to have the trend setter of our ages @SilambarasanTR_ and the Heart throbe @Gautham_Karthik joining forces for our 20th project !!

The Mufti Tamil remake has been a film that has created tremendous expectations among fans ever since it went on floors, with fans mighty happy after getting to witness STR’s look as a gangster. Apart from Silambarasan TR and Gautham Karthik, not much is known about the film's cast and crew, which can be expected to be revealed during the title launch tomorrow in light of the Christmas celebrations. Simbu has been the talk of the town for a while now after his comeback to social media, while the multi-talented actor also wrapped up his rural family action entertainer Eeswaran, which is slated to hit theatres as a Pongal release in January 2021. Simbu will also be resuming the next schedule for director Venkat Prabhu's mass masala political entertainer Maanaadu from the first week of January after his return from Sabarimala. It has also been revealed that the Chekka Chivantha Vaanam actor is also set to do Poda Podi 2, with plans to begin production mostly in 2021.